At least one Cathay Pacific Airways customer who bought a first class ticket at a huge discount had his booking cancelled by the airline, as others who took advantage of an apparent system glitch were set to learn on Wednesday if the company would honour their deals.

Hong Kong's flag carrier has remained silent for 24 hours since the incident came to light. Bargain hunters had flocked to secure return business and first class seats on flights from Vietnam to North America, sold for as low as prices in economy class.

New York-based IT professional Vincent Lee Chun-fai, 42, bought two first class tickets at 7am on Tuesday, but told the Post his flight from Da Nang to New York, which cost a total of only HK$12,921 (S$2,250) was cancelled without explanation.

He complained to the airline on Twitter, becoming the first person to disclose publicly that his booking was terminated. 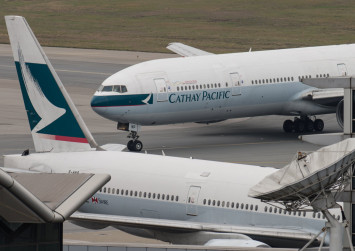 "They indeed cancelled my booking which I paid for. I even called the Cathay customer service in the US; they told me that it was cancelled by the company in Hong Kong," Lee said. "I admire Hong Kong Airlines for honouring [a similar] mistake that they made. Cathay is highly rated. They are not taking responsibility for their mistake."

Pricing errors can be covered under contract law in Hong Kong, and sellers can void ticket sales. In the United States, the Department of Transportation says airlines can cancel fares if an error is proven.

Meanwhile, university student Wang Guanran, 18, bought HK$5,470 business class flights from Da Nang to New York via Hong Kong, with the flight due on Wednesday. Wang also bought five first class round-trip tickets for use later this year. The Post has reached out to him to confirm the status of his booking.

The Post spoke to 11 people who had snapped up 18 first class and eight business class tickets totalling HK$216,925. Based on the current retail price, the company should have collected HK$5.4 million from them.

Analysts shrugged off Cathay's apparent mistake, saying the airline could still cancel the bulk of bookings if people had not flown on their bargain tickets.

Kelvin Lau from Daiwa Capital Markets said the issue was "immaterial" and "one-off" for the company.

The incident centred on Cathay round-trip tickets from Vietnam to North America on business and first class flights going for HK$5,300 and HK$6,600 respectively. The fares were then swiftly withdrawn from the website, but not before savvy buyers alerted by social media and travel blogs cashed in on the opportunity.

By Wednesday, a typical Hanoi-New York round-trip business class ticket for a flight in May was going for HK$125,000 while a first class fare was HK$246,000.

The Hong Kong carrier's first and business class seats have won multiple awards over the years and are popular with clients. In a first, Cathay travellers in these flight categories can dine on caviar, champagne and canapes among other pampering perks.

Last summer, Hong Kong Airlines made a similar error, but honoured its mistake. It sold business class tickets for HK$4,600 for return flights from Los Angeles to both Shanghai and Bangkok. The airline was widely praised after it said it would cover all bookings. As of Tuesday, the same tickets were selling for HK$30,000.

In early December, Hong Kong electronics retailer Fortress mistakenly priced a variety of goods at HK$298 on its online store, including the iPhone XS and Macbook Air. The company blocked the sale of the goods and offered a HK$300 voucher to customers with an apology.