Cause of Thai teen's death in Tokyo remains a mystery

14-year-old Tien Sukanonsawat was last seen in a hotel security footage leaving his room in night clothes and hotel slippers at 11.35pm on Monday (April 15).

Netizens in Thailand and Japan yesterday reacted with shock and grief to news that a Thai teenager had been found dead after disappearing from his Tokyo hotel room two days ago.

The cause of 14-year-old Tien Sukanonsawat's death remains a mystery as his mother, Yuwajitra Watchara-arpa, publicly declined to reveal it. She wrote on her Facebook yesterday that her son had died from an "unexpected accident".

The mother thanked everybody for helping find her son, but also asked for privacy, saying the family will not answer any queries or contacts. Her revelation ended hours of searching for Tien, who was last seen in a hotel security footage leaving his room in night clothes and hotel slippers at 11.35pm on Monday.

Tien was reportedly sharing a room with a sibling, while his parents were in another room. CCTV footage showed the boy leaving his hotel room on the fifth floor and walking towards an elevator.

The family, who own a major hotel in Surat Thani, had just checked into the Tokyo hotel on Monday afternoon for a holiday. The mother had initially posted a plea on Facebook, calling for help in locating her missing son, saying she had received excellent co-operation from the hotel, but was afraid that he had been kidnapped or had an accident. 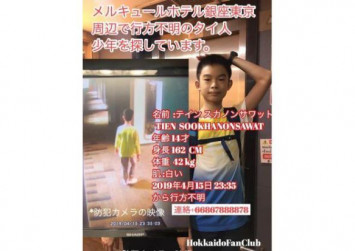 She also filed complaints with the Japanese police and alerted the Thai Embassy in Tokyo.

The mother's call for help went viral and was shared at least 7,100 times, as well as receiving more than 8,000 comments from Thai netizens in both Thailand and Japan. Thai expats in Japan spread the news, with some translating the message into Japanese.

However, supporters awoke yesterday to news that Tien had been found dead, with thousands of condolences poured into the mother's Facebook page.

Facebook user Teeraponl Pumchuang detailed the possible cause of the boy's death and his post was shared widely, but was denied by the mother.

The Foreign Ministry, meanwhile, revealed it had been informed about the boy's death and that Thai Embassy officials were helping the family to arrange a funeral and bring the body back home.

Tien was described by staff of his family's hotel, the Diamond Plaza Hotel, as well-mannered and polite to everybody. "As the family was leaving the hotel to take a flight to Japan, Tien greeted all the staff and even bid the security guards goodbye with a 'wai'," a staff member said. Some family acquaintances told a reporter that the Sukanonsawat family was very close and always did things together.