Britain returned Hong Kong to Chinese rule on July 1, 1997, under a "one country, two systems" formula which guarantees wide-ranging autonomy and judicial independence not seen in mainland China.

The central government in Beijing has promised Hong Kong's capitalist system will remain unchanged for "at least" 50 years, but it has not clarified what happens after that.

Fears of the creeping influence of Communist Party leaders in Beijing are highlighted by the abduction by mainland agents of some Hong Kong booksellers who specialised in politically sensitive material and Beijing's efforts in disqualifying two pro-independence lawmakers elected to the city legislature.

An annual protest to press for full democracy in the city is expected to take place after Xi's departure on the afternoon of July 1. The city is already on tenterhooks.

On the eve of Xi's visit, police arrested pro-democracy protesters, some of whom scrambled up a monument symbolising the city's handover from British to Chinese rule.

Part of the major rift under Chinese rule in Hong Kong has been a tenacious push by activists to get China to live up to a constitutional promise under Hong Kong's mini-constitution, the Basic Law, to allow universal suffrage as an "ultimate aim."

"This promise has been shattered under the watchful eyes of the whole world," organisers of a planned July 1 rally wrote in a statement. "Hong Kong has been lied to for 20 years. Let's retake Hong Kong for a real and fully fledged democracy."

A massive security presence is expected with thousands of police deployed to maintain order as protests simmer, including one on Saturday that could draw well over 100,000 people.

During Xi's first visit to Hong Kong as China's president, he will oversee the swearing in of the city's first female leader, Carrie Lam. He will also visit the local People's Liberation Army garrison, and meet establishment figures, although he is expected to avoid any grassroots engagement. 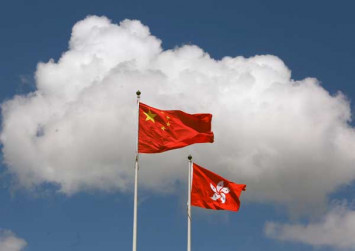 There has been talk Xi could hold a symbolic meeting with a few local democrats, an olive branch at a time of unprecedented tensions and mistrust between Hong Kong's opposition and Beijing, but it is unlikely to yield much of substance.

In a press conference on Wednesday by 20 of the city's pro-democracy lawmakers they said nothing had been confirmed.

The streets of Hong Kong have been festooned with Chinese flags and paraphernalia, including two huge harbourfront screens carrying celebratory messages.

Upwards of 120,000 youngsters will join China-related activities at a time of growing disillusionment and bitterness towards Beijing among the city's younger generation.

Over the past five years under President Xi's tenure as Chinese leader and amid a ferocious crackdown on civil society and critics on the mainland, the squeeze on Hong Kong's autonomy has intensified, say diplomats, observers and activists.