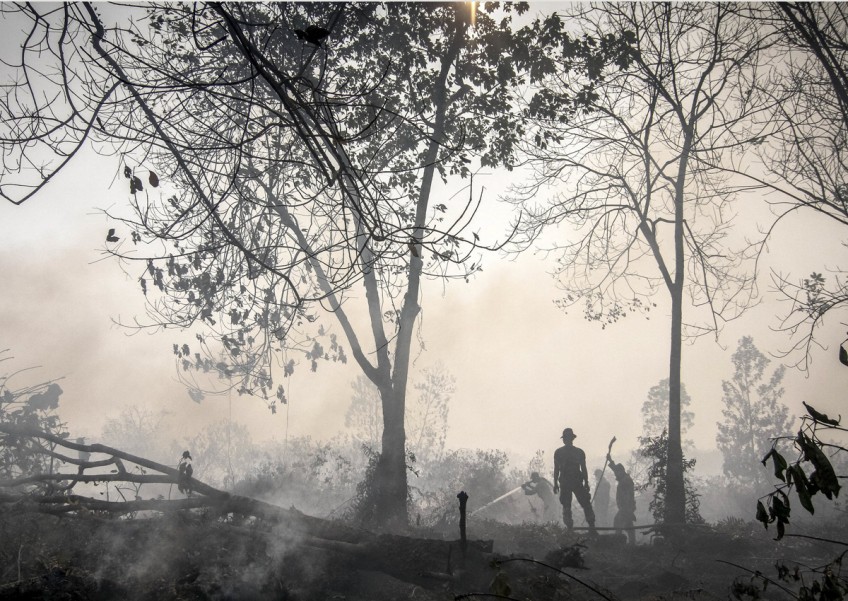 JAKARTA - The haze from Kalimantan's forest fires intensified yesterday, driving the pollution gauge in parts of the Borneo island to hazardous levels, especially in Central Kalimantan province, where the pollution index came close to 2,000.

In Sumatra, the other centre of the haze outbreak, rainfall helped alleviate the pollution in Riau province. But the air may worsen again in Jambi and South Sumatra provinces after days of improvement, reported the local media.

According to data from the Indonesian Agency for Meteorology, Climatology and Geophysics, the Pollution Standards Index (PSI) at Palangkaraya, capital of Central Kalimantan, reached a day's high of 1,986.73 yesterday, more than five times above the "hazardous" air quality base level of 350.1, reported Bloomberg.

In the West Kalimantan city of Pontianak, the gauge peaked at 706.45.

The morning visibility in Palangkaraya reached only 10m yesterday, and residents had to put up with a stench in the air and irritated eyes, online newspaper Banjarmasin Post reported.

The persistent haze prompted about 150 activists to stage a protest yesterday outside the office of Central Kalimantan's acting governor Hadi Probowo, urging for quick and concrete solutions, reported the newspaper.

"The government is not serious in addressing the fire in Central Kalimantan. They only prevent the burning, but never go for the perpetrators," said one protester.

Meanwhile, Jakarta announced it has revoked the licence of Indonesian wood supplier Hutani Sola Lestari, which is based in Sumatra, reported Agence France-Presse.

Muhammad Yunus, director of criminal law at the Environment Ministry, said a Singapore-owned company was also under investigation, but declined to elaborate, reported Reuters.

The fires, mostly started to clear land for oil-palm and pulp and paper plantations on Sumatra and Kalimantan, are an annual occurrence.

But Indonesian President Joko Widodo has insisted this year that law breakers will be punished.

Police have in the past week launched investigations into several companies and arrested executives, while more than 170 individuals are also being probed over the fires.

Malaysia's state of Sarawak, which borders Kalimantan, yesterday reported the return of the haze, with the Air Pollutant Index (API) in the capital of Kuching reaching 112, an unhealthy mark, the BorneoPost reported.

But the API in Kuala Lumpur hovered in the moderate range of between 70 and 80.

In Sumatra, the haze in Jambi province has thickened again, the Tempo daily reported, without citing the PSI.

According to Arif Munandar, who heads the Jambi branch of the National Agency for Disaster Management, the haze came mainly from the neighbouring South Sumatra province.

Air quality in Pekanbaru - Riau's capital, where a haze emergency was declared last week - was reported to be good yesterday.