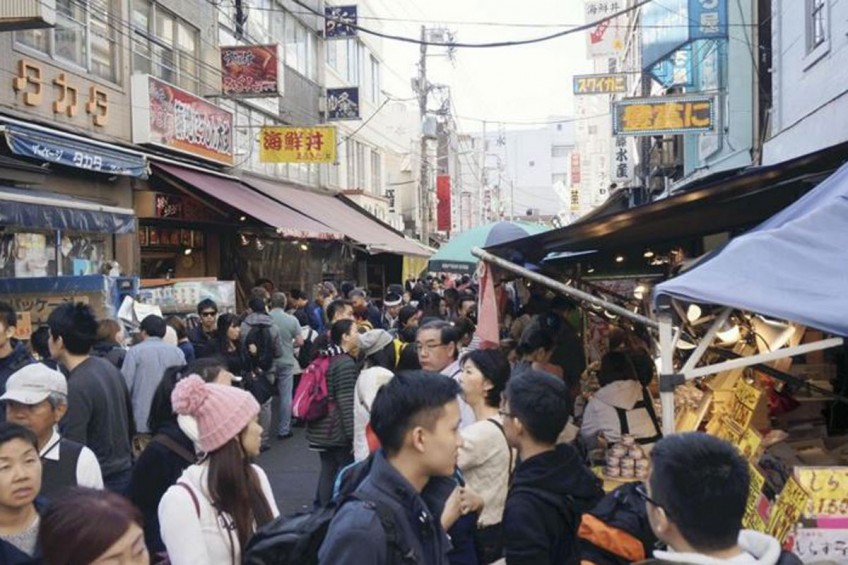 There is a year left until the opening of Toyosu market, the site where Tsukiji market, home to 1,000 traders and one of the world's largest such facilities, will be relocated. Its move from Tokyo's Chuo Ward to adjacent Koto Ward will be an unprecedented event. Those involved are grappling with the challenge of how to establish a new brand while preserving the existing Tsukiji one, which carries over 80 years of history and tradition.

The Tokyo Metropolitan Central Wholesale Market, better known as Tsukiji Market, will end its eight-decade history on Nov. 2 next year, passing the baton to Toyosu market, which will open on Nov. 7 in an area about two kilometers away.

The new market has a site area of approximately 40.7 hectares, about 1.7 times that of Tsukiji market. Three buildings each for seafood middle traders, seafood wholesalers and fruit and vegetable wholesalers are under construction. Each building is expected to be completed next spring.

"We'd like to move out from this aging Tsukiji [market] as soon as possible and do overseas business from a cutting-edge market," said Masahiro Sugimoto, president of fresh produce middle trader Tsukiji Kushiya.

However, an issue stands in the way for market operators: The unprecedented scale of the relocation work. They will have only four days to move from Tsukiji to Toyosu. This vast market, dealing with more than 2,700 tons of produce a day, will relocate in its entirety within this short period.

Operators will have to move various items, such as refrigerators, fish tanks, load carriers and even office devices, including computers. The three-wheeled turret trucks that run around the market will be used in Toyosu as well; how to move the about 2,000 of them currently in operation will be another problem.

Currently, the Tokyo Fish Market Wholesalers Cooperative is checking the items that each of the market operators plan to take with them to Toyosu. However, Naohide Kametani, a managing director of the cooperative, said, "There is a long way to go in figuring out what we must take to the new location."

Among Tsukiji market's attractions are the Jonai Shijo Inner Market, which is famous for tuna auctions, and also the Jogai Shijo Outer Market, where visitors can encounter kitchenware such as knives and dishes, as well as various foods.

There were initial plans for the new market to have a commercial complex comprising a kitchenware market dealing with items from all over the world and a food court serving fresh produce from the market. However, the operators that were to construct and manage the facilities withdrew from the project this year, causing a desperate situation regarding the plans to have them open simultaneously.

Only the Inner Market will open in Toyosu for the time being, and this is raising concerns in Koto Ward. A government official of the ward who is in charge said, "The site may turn out to become a mere operating facility where business trucks and vehicles come and go." Koto Ward Mayor Takaaki Yamazaki said, "I hope a commercial facility is built as soon as possible [within the new market] in order to launch a new Toyosu brand."

Meanwhile, in what remains of Tsukiji's Outer Market after the relocation, about 400 stores and restaurants will keep operating. Preserving the Tsukiji name is seen by some as indispensable, and a local Tsukiji shopping district is pursuing clients and tourists on a daily basis by saying "the Outer Market won't relocate."

To support such a movement, the Chuo Ward office is constructing a commercial facility called Tsukiji Uogashi, which will serve as the core of the Outer Market. A total of 61 fish and fruit and vegetable stores are already listed to do business within the complex in the aim of establishing a "stronghold of food" that can satisfy professional chefs. The commercial facility is scheduled to open before the relocation. "It is not permissible to take the bustle away from Tsukiji," said a Chuo Ward official.

The Tsukiji Outer Market shopping district promotion association director Akio Suzuki, who runs a chicken shop in the Outer Market, said: "The Outer Market has helped the market function. We'd like to satisfy our customers with various products that the Inner Market can't do by itself."