Chengdu mall has everything but crowds 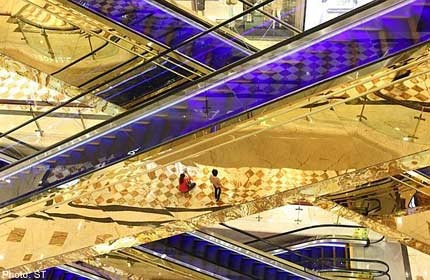 Winding escalators lend opulence to the interior of the world’s largest building, a glass and steel structure with an undulating silhouette.

CHINA - With its undulating silhouette and hulking size, the New Century Global Centre - the world's biggest building - is impossible to miss among the tall skyscrapers of Chengdu. The massive glass and steel structure sits snugly like a heavy metal box placed on the earth by the gods in this south-western Chinese city of 14 million.

The centre officially opened on Sept 1 in Tianfu New District in Chengdu's south - a new business area that aims to accelerate the city's development. It is 100m tall, 500m long and 400m wide, offering 1.7 million sq m of floor space - or 12 times that of Singapore's largest mall, VivoCity. Put another way, it could fit 20 Sydney Opera Houses.

If that does not begin to hint at its massive scale, consider what's inside: a university campus, two hotels, a shopping mall, an Imax cinema, offices, a convention centre and a seaside resort with water lapping on a fake beach, an Olympic- size ice rink and Mediterranean- themed shopping village.

Clearly, if anyone needs a definition of excess, this is it. When I stepped through the revolving doors of the all-in-one shopping mall, vast khaki-toned marbled halls lined with palm trees greeted me. The cavernous central atrium compelled me to gaze upwards to figure out just how high the glass ceiling went.

Natural sunlight filtered in through the wave-like roof structure as winding escalators - some golden in colour and with bright blue LED panels on the sides - criss-crossed one another, giving a sense of opulence.

Brands such as H&M, Uniqlo, Adidas and Korean anchor tenant Lotte Department Store are spread out throughout the mall. Singapore is represented by coffee and toast cafe Ya Kun in the basement level.

But it is a water park with an impressive 5,000 sq m artificial beach - and a huge LED screen displaying tropical sunsets - that is the mall's centrepiece, giving locals in land-locked Chengdu a taste of the sea for 180 yuan (S$37) per entry.

The local government is said to have spent as much as £5 billion (S$10 billion) on the entire project, according to British daily The Telegraph.

But not all's well at the mall, it seems. Granted, I visited on a Monday, but the mall lacked the buzz that new malls typically have. Bored shop assistants easily outnumbered shoppers.

Of the 21 leisure and kids' stores on the mall's third floor, 15 had no customers. At Starbucks, only one table was occupied. There is also a conspicuous absence of luxury brands. Only one, Burberry, has a shop here.

The cavernous space makes the mall feel echoey and cold.

The fact that the new district in which the mall is located is less built-up than the traditional city centre makes it less attractive as there are no other developments in its immediate vicinity. Cabs are hard to come by.

But six retailers told me that the mall livens up on weekends and public holidays.

Mr Mark Leoi, chief executive of Ya Kun, said that the mall has huge potential for growth, especially once the hotels and train station linked to it open.

"With the rental conditions we had, we felt that the risks were reasonable... We're already cash-positive and think business can only get better," he said.

That Monday though, the artificial beach was empty. The three lifeguards on duty stared down at vacant beach chairs. While the beach has a maximum capacity of 5,000 people, staff at Paradise Island Waterpark said only about 600 tickets a day are sold on weekends.

Weekday sales are more dismal, with the figure slumping to about 100 a day. But it is not just the poor shopper traffic that has raised concerns about the centre's future.

Reports say the 50-year-old billionaire behind the project, Deng Hong, an ally of sacked Sichuan deputy party boss Li Chuncheng, has been detained. A corruption probe is ongoing into those linked to Li, who is alleged to have profited from a string of property developments.

This has led to talk that the government might take over the building. The Telegraph newspaper in London has described it as the "largest and most embarrassing monument to the allegations of corruption", although there is little information about the exact details.

With the explosion of retail space in Chengdu, a tier 2 city often seen as the gateway to China's rugged west, these uncertainties add to the worries about the mall's future.

Despite a robust economic growth of 13 per cent last year and disposable incomes per capita rising 14 per cent to 27,194 yuan, it remains to be seen if the mall will attract shoppers.

Will it become a "ghost mall", like many malls in China that fail to attract shoppers and tenants?

New South China Mall in Guangdong province, for instance, opened in 2005 to much fanfare as the world's biggest mall, able to fit 2,350 stores. It is now virtually deserted.

Retail experts concede that Chengdu's malls are facing "unprecedented leasing pressure". A report by Savills noted that the 900,000 sq m of new retail space expected in the second half of the year will force landlords to compete fiercely for tenants.

"The volume of new supply rushing onto the market is going to make the coming years very interesting as we see which projects succeed and which fail," the report said.

But for now, the novelty value is reason enough for some to make a trip to the New Century Global Centre.

"It's much bigger than I imagined... I spent more than 20 minutes just walking around its perimeter," said the self-proclaimed architecture buff.

And despite all the doubts, some locals said they were glad the centre had put their city on the map.

Hotel receptionist Guo Lu was at the mall on her day off.

"If my friends visit, I'll bring them here," she said. "How many people can say they stood in the world's largest building, and that the building is in Chengdu?"