The northern tourist city, Thailand's second city, was ranked the number 1 air-polluted city with a 209 air quality index score on airvisual.com, before the air then worsened to an AQI of 234 around noon. Meanwhile the Pollution Control Department (PCD) reported the average 24-hour level of PM2.5 dust particulates had reached dangerous heights in all nine northern provinces of the Kingdom.

According to the PCD report, the 24-hour average level PM2.5 at 9am ranged from 58mcg to 146mcg in the nine northern provinces. 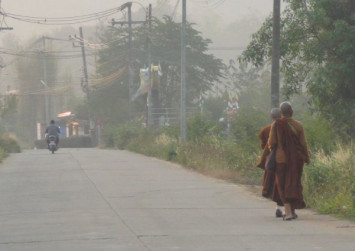 Forest fires, which have erupted in many parts of the North, were largely blamed for the poor air pollution.

The satellite image report on Monday showed that the nine northern provinces had a combined 929 hot spots, mostly in forestland. In Chiang Mai 121 hot spots , Nan had the highest number at 176 hot spots. The neighbouring countries of Myanmar and Laos had 4,487 hot spots and 3,440 hot spots respectively. In Phayao's Muang district, nearly 100 officials were dispatched on Monday evening to fight forest fires that had erupted since 7.45pm on the mountains behind Phayao University in Tambon Mae Ka.

They managed to contain the fire for the most part by night's end. The officials continued to fight fires in the area on Tuesday morning and said that the blazes had damaged hundreds of rai of forestland in the area.