A record 73,765 cases of child abuse were brought to the attention of 207 child consultation centers across the nation in fiscal 2013, according to a preliminary report released Monday by the Health, Labor and Welfare Ministry.

It was the highest figure since the ministry began carrying out this type of survey in fiscal 1990, and topped the figure for fiscal 2012 by 7,064. It was also the first time in the survey's history that the nationwide figure exceeded 70,000.

"Active responses to child abuse are a significant factor behind the increase in reported cases," a ministry official said. The situation remains serious, however, as cases in which abused children have died continue unabated.

By prefecture, the largest number of child abuse cases was reported in Osaka Prefecture at 10,716, followed by 9,803 in Kanagawa Prefecture, 5,414 in Tokyo, 5,374 in Chiba Prefecture and 5,133 in Saitama Prefecture. Marked increases were seen in big cities.

In August last year, the ministry revised its action guidelines so that if abused children have siblings, the siblings must also receive care on the premise that they have suffered from psychological abuse. 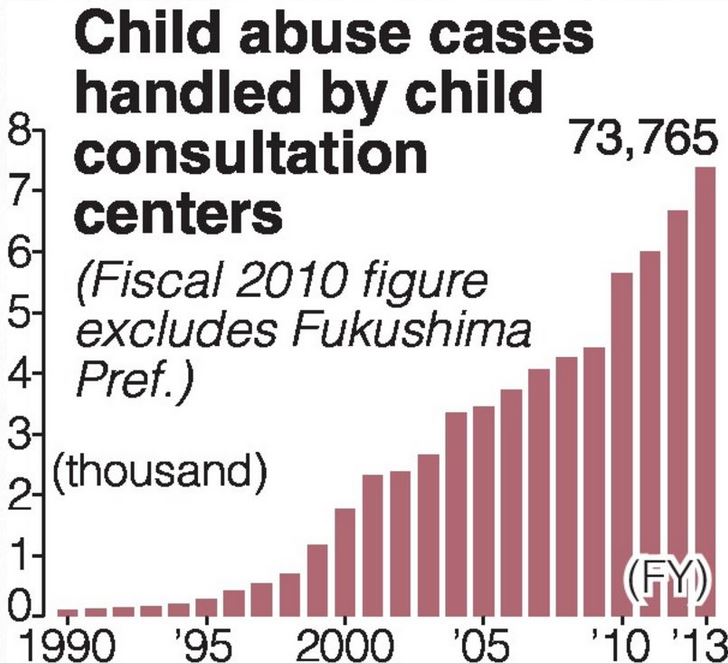 Regarding domestic violence in the presence of children-when a parent is violent toward their partner in front of a child-police have actively reported such cases as psychological abuse of children in recent years.

The ministry official said these factors have resulted in the increase in the number of child abuse cases handled by child consultation centers.

There were 23 cases across 16 municipalities in fiscal 2013 where the heads of child consultation centers asked family courts to suspend parental rights. Parental rights can be suspended for up to two years to protect children from their parents' abuse.

The number was down from 27 cases in 17 municipalities in fiscal 2012, when the system was introduced.

In one such case in fiscal 2013, the parents refused to allow a blood transfusion for their child, who suffered from leukemia. In another, a woman expressed her desire to continue living with her partner even though he had sexually abused her child.

Parental rights were suspended in 15 of the 23 cases. Five applications were later withdrawn, and three were still undergoing legal procedures.

There were seven separate cases in six municipalities in which the heads of child consultation centers sought orders to permanently deprive parents of their parental rights or authority to control their children's lives.