Children of a lost generation 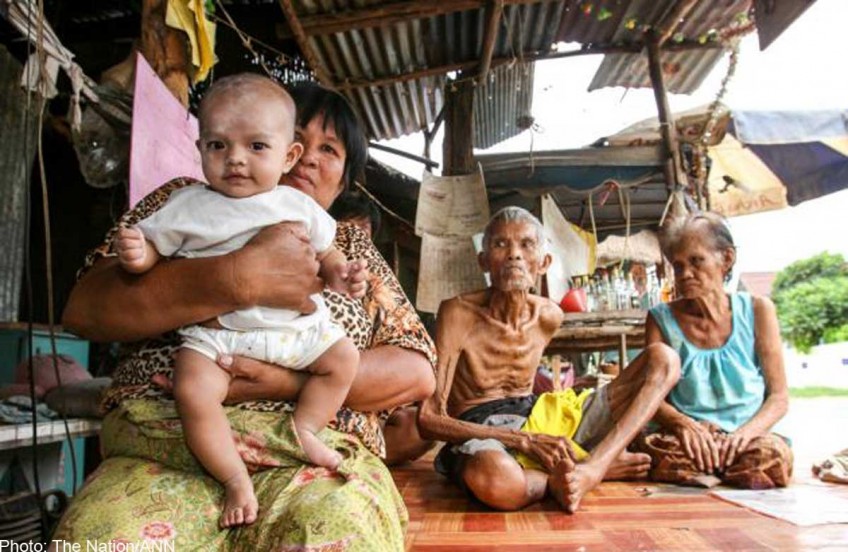 THAILAND - All over Thailand, grandparents are struggling to raise their children's offspring. The kids are suffering too

Every night, 53-year-old Seng Codechum gets up several times in order to prepare infant formula for her seven-month old grandson. In the bedroom she shares with her 63-year-old husband and four-year-old grandson, the baby's crying awakens the two elders, who take turns feeding him. Several months have passed since their sons and daughters-in-law left home in Khon Kaen's Baan Nong-Or village to find work in the big cities, leaving the young children in their care.

"His parents left him with us when he was one month old," says Seng, pointing to her younger grandchild. "The elder one they left when he was three days old."

Across Thailand, about 21 per cent of children under the age of 18 - or some three million children - are not living with their parents mostly due to internal migration, according to the findings of the Multiple Indicator Cluster Survey (MICS) conducted by the National Statistical Office with support from Unicef in 2012. In the Northeast, the rate is almost 30 per cent.

"The number of children left behind in Thailand is remarkably high compared with other countries and should be a major cause of concern," says Andrew Claypole, chief of Social Policy for Unicef Thailand. "People in Thailand think it is normal for grandparents or others to take care of grandchildren whose parents have migrated. It is not. The scale of the internal migration phenomenon in Thailand is massive and unlike other countries where MICS studies have been conducted."

According to MICS 2012 survey data, only five per cent of children in Laos are not living with their parents, while the rate in Vietnam, Costa Rica and Nigeria is 4.4 per cent, 3.4 per cent and 6.5 per cent, respectively.

In 2013, Mahidol University's Institute for Population and Social Research (IPSR) began conducting a Unicef-supported long-term study on the impact of internal migration on young children. The study in Khon Kaen and Phisanulok provinces is tracking 1,000 children aged three years and younger who are either living or not living with their parents. The research, which will be carried out over four years, will assess the impact of extended parental absence on their children's well-being and development.

The study, "The Impact of Internal Migration on Early Childhood Well-being and Development: a Longitudinal and Mixed-Method Study", is looking at the impact of parental migration on several aspects of early childhood development, as well as the effect of such migration on caretakers, including their mental health and household finances.

"In the absence of their parents, nearly 90 per cent of the children are living with their grandparents, most of whom have only a primary education background," notes Associate Professor Aree Jampaklay, the leader of the IPSR research team, citing the study results from the first year. "We also found that about 36 per cent of the caretakers, mostly grandparents, are at risk of having mental health problems."

"I can see a clear difference here," says Sumit Osopama, a teacher at Baan Nong-Or Early Childhood Development Centre in Khon Kaen's Nam Phong district. "Children who live with their grandparents weigh less and are shorter than children in the same age group who live with their parents. It seems that the grandparents do not pay much attention to their grandchildren's diets. They don't play with or read for the children. They don't really know how to stimulate the children's development."

Nearly half of the children in Baan Nong-Or village do not live with their parents, adds Sumit, who thinks that grandparents depend too much on teachers like him to stimulate their grandchildren's development and learning ability.

On a recent sunny afternoon, Seng sat on the front porch of her house with both of her grandchildren on her lap. She smiled as she gently patted their heads, but her eyes showed her fatigue.

"It's really tiring raising young children. I have to smack him sometimes when he doesn't eat," Seng says, looking at the elder grandson, who usually eats just once a day. "Sometimes all he eats are some cheap snacks and a few spoons of rice."

Across Baan Nong-Or and nearby villages, many grandparents are struggling to pay for their grandchildren's food, especially infant formula. They seldom have money left over to buy the children books or educational toys. Most complain that they receive only a little money from the parents who have migrated, and that these remittances are never consistent.

"They send us Bt1,000 every three to four months," says Seng, adding that their sons call regularly but visit just once a year. "The infant formula alone is Bt3,000 a month. I'm not sure what my sons do for a living, but they said they will come and take their children to live with them when they are rich."

Seng's neighbour, Siho Wilaipit, 55, and his wife face a similar situation. Their son left his three-year-old daughter with them several months ago after his wife ran away. The elderly couple needed to find some construction work in order to cover their granddaughter's expenses.

"We have to work harder and we cannot stop. Because if we stop, our granddaughter will have nothing to eat," says Siho, whose son, who works at a factory in Chon Buri, has sent them only Bt5,000 since late last year. "The child misses her father. But my son said he couldn't take care of her by himself and cannot afford to hire a caretaker to look after her there."

Like many grandparents who now have to look for work to pay for their grandchildren's expenses, Seng's husband, Piang, occasionally earns money, in his case by mowing his neighbours' lawns. But there is not work like this to be found every day.

"I have problems sleeping these days," says Piang, who also suffers from heart disease. "I get stressed thinking about my grandchildren's future."