Chills and thrills in Niseko 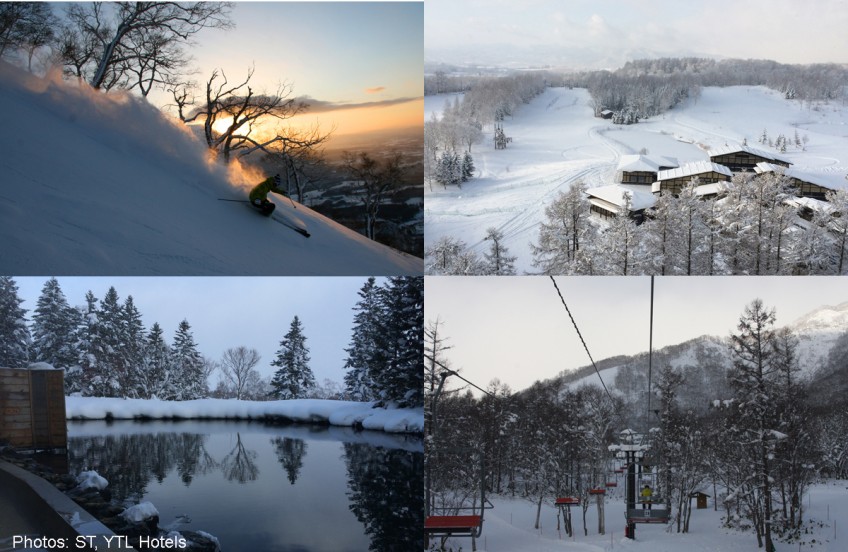 Transit and hop onto another JAL flight to the New Chitose Airport, which is the gateway to the Hokkaido prefecture.

It takes 90 minutes and, after that, it is a three-hour coach ride from the airport.

For those who want to shorten their travelling time, Singapore Airlines operates a direct flight from Changi to Sapporo for a limited period until the middle of this month.

Hotel prices a person a night at the Green Leaf Niseko Village and Hilton Niseko Village start from around 11,000 yen (S$121), while one night at the newly launched Kasara Townhouses starts from 120,000 yen. All three properties belong to YTL Hotels.

For more information, go to niseko-village.com.

There is something inexplicably calming about watching falling snow. The way it drifts gently in the breeze before - as if having made up its mind - settling onto a pile of fresh white powder.

My thoughts are abruptly interrupted as the chairlift ride ends and I soon find myself zig-zagging down and trying my best to stay upright on the aptly named "Don't Blink" slope.

It is advice worth heeding as the scenery around me in this faraway Japanese town of Niseko on the northern island of Hokkaido, where winters are a fairy-tale white, is stunning.

Besides the breathtaking vista of Mount Niseko Annupuri, whose south-eastern face serves as the platform for four ski resorts, there is also Mount Yotei - nicknamed the Mount Fuji of Hokkaido - which rises majestically on the horizon across the Shiribetsu River.

Racing down the tree-lined slopes is intimidating and meditative as I marvel at the beauty of Mother Nature.

Alicia, my garrulous instructor from Canada, keeps an attentive eye on me as I miraculously manoeuvre my way around herded packs of Japanese schoolchildren and safely back to the start of the chairlift.

"One more time?" she chuckles, before giving me the thumbs-up.

It is an invitation too tempting to decline, not just for me, but also for the thousands of ski enthusiasts who descend in droves on Niseko United, Japan's answer to Vail and Whistler in North America and Europe's Courchevel and Zermatt, during the winter season which stretches from December to May.

Siberian winds interacting with moisture from the Sea of Japan produce a massive 18m of snowfall on average during those six months and the snow there is regarded as some of the softest and lightest in the world.

It ranges from wanderlust Scandinavians and thrill-seeking Australians interested in off-piste skiing to Asian travellers - those from China and Hong Kong form the biggest group, followed by Singaporeans - who arrive with children in tow for a relaxing family holiday.

While skiing here can be an excellent form of exercise - you burn almost as much calories in an hour as you would jogging - it is certainly not a cheap activity.

Group lessons start from 7,000 yen (S$77) for two hours, while renting a full set of equipment, including skis, poles, boots plus jacket, pants and helmet will set you back almost 10,000 yen. And that is excluding the full-day lift pass (5,000 yen) needed to get you up on one of the 24 available runs at Niseko Village.

Last month, I manage three mornings of skiing, a modest amount considering the two anterior cruciate ligament operations on my knees. But dipping into the outdoor onsen at the Hilton Niseko Village, even for just 15 minutes, is like stepping into a warm fountain of rejuvenation.

My aching joints are soothed and so is my urban restlessness as I sip a hot Royce chocolate drink - I recommend the upsized version that, for an extra 100 yen, comes with marshmallows and whipped cream - at the nearby Village Patisserie as an old Christmas tune plays in the background.

It is the ideal accompaniment as I write postcards - a habit imparted by my grandmother - to friends in foreign lands.

We are later serenaded by Freddy Cole, younger brother of American jazz legend Nat King Cole, at the official launch of the Niseko Village over dinner.

For those who may be weary of the slopes, there are other activities to sample.

I try the snowmobile tour which, despite the roar of the engine, is a rather tame excursion around a figure-of- eight track. Perhaps the husky sleigh ride, to be ready next winter, will offer more bite.

For now, I decide to explore the surrounding area on foot and go for a walk after breakfast.

It is a beautiful morning adorned in freshly fallen snow, with cars almost fully submerged, as if someone hit the reset button and the world awakened to a new, white canvas.

A short 15-minute walk brings me to a gallery of sorts at the Green Leaf, a boutique hotel where original artwork from Japanese abstract painter Soichiro Tomioka and graphic designer Emi Shiratori are displayed.

I am told another work of art is nearby. Milk produced in Hokkaido is famed for its creaminess and, at the Takahashi Dairy Farm, owner of the cafe Milk Kobo, one cannot leave without sampling its yogurt drink and cream puff, whose explosion of vanilla custard is worth the trek.

If you are staying at the newly launched and swank Kasara Townhouses, the personal concierge will help deliver these delicious treats to your doorstep, I am told.

What is also later revealed to me is the beauty of winter nights as I trudge through the snow after a wonderfully satisfying seafood dinner at Crab Shack, that featured scallops and oysters the size of my iPhone 5s and sweet Hokkaido snow crabs, on my last night in Niseko Village.

Perhaps because of the indulgent meal, it is hard to move quickly in the deep white powder, but I do not mind the long pauses between steps.

I stop to stare skywards and am fascinated at how the moonlight bounces off the fluttering snow.

Almost as if I was gazing at falling stars.

The running joke around Niseko Village was that when YTL Corp acquired the vast 809ha of land in 2010, there was no actual village to speak of.

That misnomer has since been corrected this winter, after the Malaysian conglomerate officially launched the Village last month as part of its expansion and redevelopment plans for the hugely popular winter destination for ski enthusiasts in Hokkaido.

Situated on the site of a former 18-hole golf course and a short walk from the Hilton Niseko Village, the Village is a series of traditional wooden townhouses.

With sliding screens as doors and lantern-lit walkways between shops recalling the classic machiya style of architecture, it feels like you have been transported to Kyoto, Japan's historical capital.

Built in just five months, the selection of dining and shopping options is understandably limited, but YTL assures the media group that there are long-term plans to expand the Village.

For now, there is Two Sticks, a South-east Asian tapas joint whose versions of Malaysian, Singaporean and Thai fare are passable. The Crab Shack, a grilled seafood eatery, and Japanese restaurant Yang Shu Ten, which features Hokkaido produce, are more likely to tempt the tastebuds.

The Village Patisserie, selling desserts and comforting cups of hot chocolate, is another enticing cafe worth checking out.

As for shopping, Hokkaido-based lifestyle department store Ikeuchi has two shops selling outdoor gear and high-end luxury goods, while the Taisho Glass Palace stocks a host of products from Otaru, a city famed for its intricate glassware.

The Village is the heartbeat of YTL's push for an integrated apres-ski concept such as France's Courchevel and St Anton in Austria, where skiers - while still wearing their gear - are able to enjoy other forms of entertainment to complement their skiing holiday.

There are plans to build a boutique hotel, in the style of a ryokan or traditional Japanese inn, to expand the accommodation options that also include the new and luxurious Kasara Townhouses.

At its official launch last month, YTL managing director Francis Yeoh quipped that after he chanced upon the picturesque area of Niseko Village more than 30 years ago, he wanted to keep the secret to himself.

But good things are meant to be shared, he added, and with development plans showing no signs of slowing down, it is impossible not to notice the Village.