China anti-terror advice to citizens: Fight back or run away 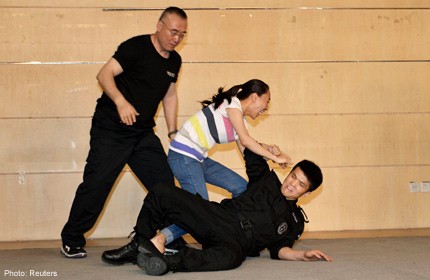 A student takes part in an anti-terror training given by police at a campus in Beijing, June 11, 2014. China has launched a nationwide, year-long "anti-terror operation", state media said on May 25, days after announcing a similar crackdown targeting the troubled Xinjiang region following an attack which killed dozens.

BEIJING - Chinese citizens confronted by knife-wielding attackers should "quickly run away", authorities have advised in an updated anti-terrorism handbook.

But those made of sterner stuff, it suggests in a section entitled "Do one's best to fight back", can "get together with others" and "make use of anything handy, handbags, clothes and umbrellas".

The 45-page "Citizens' Anti-Terror Handbook" is illustrated with a cartoon of a knife-waving, bomb-carrying terrorist, complete with pot belly, maniacal grin and skull-and-crossbones jumper.

It was updated Tuesday in the wake of a series of attacks over the past year which have put Chinese authorities on edge.

The book also urges people to be on alert for "strange behaviour", "unusual smells" and "unusual sounds" from neighbours.

It cited observing hospitals or supermarkets, "looking around in all directions", or "abnormal conversations" as examples of suspicious actions to watch for.

Vigilant citizens can "take a picture with your mobile phone of the person", the book says, but warns: "Safeguard yourself, don't let the suspect find out."

For those who come across a terrorist knife attack, the book urges people to "quickly run away", using nearby buildings or trees as cover. "Don't stop and observe," it adds.

The booklet has been distributed free in China's biggest cities and in the western region of Xinjiang, the homeland of mostly Muslim Uighurs.

Beijing commonly blames separatists from Xinjiang for carrying out terror attacks which have grown in scale over the last year and spread outside the restive region.

Among the most shocking incidents was a market attack in Xinjiang's capital Urumqi in which 39 people were killed in May, and a deadly rampage by knife-wielding assailants at a train station at Kunming in China's southwest in March, which left 29 dead.

But the illustrations in the book do not depict attackers in Muslim dress.