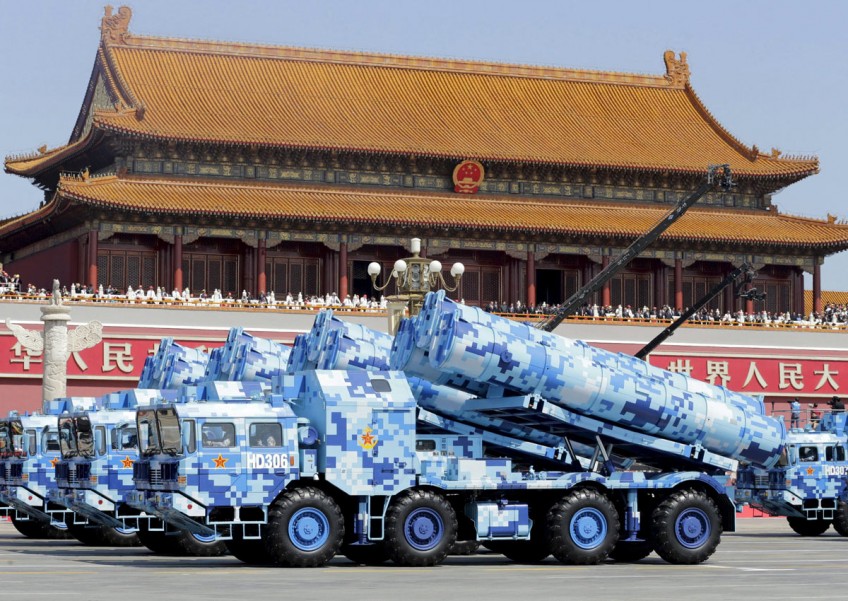 Military vehicles carrying shore-to-ship missiles drive past the Tiananmen Gate during a military parade to mark the 70th anniversary of the end of World War Two, in Beijing, China, in this September 3, 2015 file photo.
Reuters

BEIJING - Enemy forces in the West are trying to "falsify" the history of China's ruling Communist Party and its military and force a "colour revolution" on troops who are too susceptible to outside influences, the military's official newspaper said on Tuesday.

President Xi Jinping has repeatedly reminded the military to be loyal to the party, as he also steps up efforts to fight graft in the army and modernize forces that are projecting power across the disputed waters of the East and South China Seas, though it has not fought a war in decades.

In a front page commentary, the official People's Liberation Army Daily said that unnamed enemies in the West were trying to undermine the military.

"Hostile Western forces are sparing no effort to belittle our fine traditions, denigrating our heroes and falsifying our party's and military's history," it said, without giving details.

They are "trying in vain to push a 'colour revolution' to get us to change our stripes", the newspaper added, referring to popular uprisings that occurred in former Soviet states like Ukraine that swept away often long-established rulers.

The party does not look kindly upon any challenges to its official narrative of history over issues like World War Two, which lauds the role of the party in fighting the Japanese, a view often challenged by Western academics and others who say it was Nationalist forces who did most of the fighting.

The paper said that as China continued to modernize, its soldiers, who were mostly born in the 1980s and 1900s, were more and more susceptible to "multiple, diverse values and points of view", a huge challenge to their ability to distinguish right from wrong.

"Their understanding and appreciation of our fine traditions is not deep, and their knowledge is insufficient," it added, again without elaborating.

The Chinese military, the world's largest, has made similar warnings in the past.

China's forces have been shaken by Xi's war against deep-seated corruption, which has toppled some of the military's most senior officers.

China stepped up a crackdown on corruption in the military in the late 1990s, banning the People's Liberation Army from engaging in business. But the military has been involved in commercial dealings in recent years due to a lack of checks and balances, military analysts have said.

Anti-graft advocates say corruption in the military is so pervasive that it could undermine China's ability to wage war.