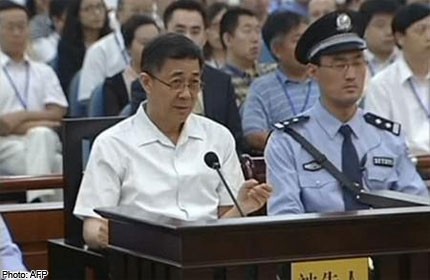 BEIJING - Official Chinese media heaped praise on the trial of ousted politician Bo Xilai Saturday as it entered an unexpected third day, calling it a landmark in the history of Chinese jurisprudence.

Bo, once one of China's highest-flying politicians, faces charges of bribery, embezzlement and abuse of power in a scandal that has rocked the ruling Communist Party.

The court is providing regular but delayed transcripts of the dramatic hearings on its verified account on Sina Weibo, China's equivalent of Twitter.

But no live audio or video is available, and nor are any foreign media or independent observers present in court.

"The live show has addressed various doubts and rumours in and outside China," the paper said. "It demonstrated that the authorities are ready to receive more public scrutiny."

Bo was once head of the southwestern megacity of Chongqing, and tipped to join the highest echelons of Chinese political power.

He was brought down by a scandal triggered by the death of British businessman Neil Heywood, whom Bo's wife Gu Kailai was convicted of poisoning.

It shook the party and exposed deep divisions within it.

But while the trial contents have been seen as astonishing, nothing has been said publicly of Bo's links with other top Communist leaders, and analysts believe his conviction and sentence have been agreed beforehand.

Bo has mounted a vigorous defence and has showed open disdain for prosecution witnesses, including Gu, who he derided as "insane".

He has denied bribery and embezzlement, with the third charge of abuse of power yet to be addressed.

The hearings are a stark contrast to most previous Chinese political trials in which most defendants have humbly confessed their crimes amid opaque court proceedings.

Calls by ordinary Chinese citizens for greater official transparency have been mounting, the Global Times said.

"For a while, the Chinese public has been complaining about injustice in constant news reports of scandals or social issues," the paper said.

"The open and transparent trial of Bo provided a different picture to the public, which will significantly change the image of the judicial system.

"The most important thing now is to have a fair trial for Bo's case, which will naturally boost the public's confidence," the paper said.