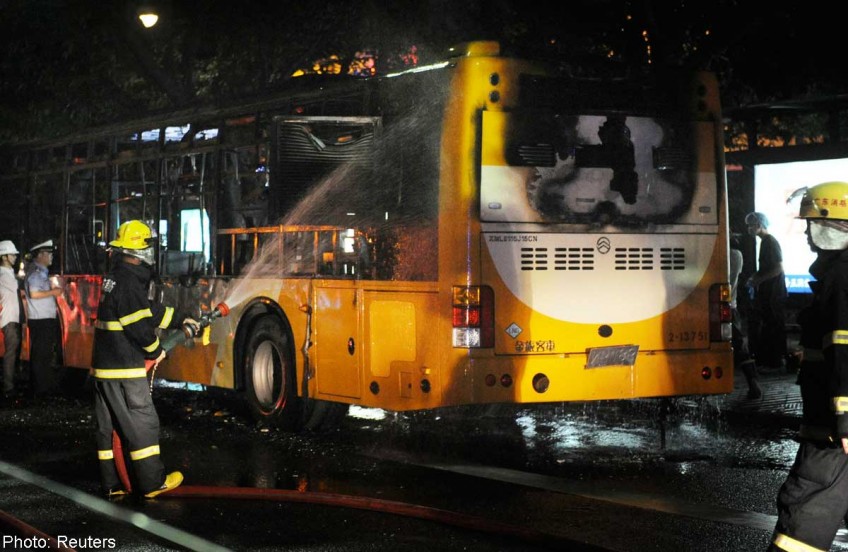 Firefighters extinguishing the blaze on a bus after an explosion in Guangzhou on Tuesday. The incident was the seventh deadly attack on a public bus in China since 2009. While official information on the culprits and their motives is sometimes patchy, most incidents were the work of disgruntled individuals.

A fire sparked by an explosion on board a public bus in Guangzhou killed two people and injured 32, the latest in a string of anti-social incidents in China.

Guangzhou police said they arrested a 25-year-old man from Hunan province for arson yesterday. No other information was available at press time.

Tuesday's incident in Guangzhou, the capital city of southern Guangdong province, was the seventh deadly attack on a public bus in China since 2009.

While official information on the culprits and their motives is sometimes patchy, most of the incidents were the work of disgruntled individuals.

The deadliest attack took place in Fujian province's Xiamen city last year, when a poverty-stricken street vendor set a public bus on fire, killing himself and 46 others.

In 2009, a similar attack by an unemployed gambling addict in Chengdu, Sichuan province, killed the man and 26 others.

These crimes, known as "revenge on society" acts, have ignited a debate in China about the negative side effects of its rapid economic transformation of the past few decades.

The rush to get rich has weakened the social fabric, say analysts, who point to the lack of social and mental health support for migrant workers uprooted to big cities such as Guangzhou.

"These workers were previously in small, tight-knit rural communities and are now forced to move to big cities of strangers to survive. "They can't bring their families along and they have no one to turn to," noted sociologist Tang Jun of the Chinese Academy of Social Sciences.

"You can't totally prevent people from turning to violence," he said.

"So it is important not just to focus on more security screening or more policing on public transport, but also to look at the root cause of a lack of social support for those at the bottom of society," he added.

Experts say that China's mental health infrastructure is under-developed, which means troubled individuals do not receive help and their behaviour escalates into violence.

"Because of the pursuit of materialism, there has been a lack of psychiatric care, mental health-care and 'software' like community organisations and support groups," said Beijing Institute of Technology sociologist Hu Xingdou.

He added that China's opaque decision-making hierarchy and official corruption deprive ordinary Chinese of legitimate methods of seeking redress, and so drive some to desperate acts.

"People often can't use official channels to solve their grievances because local governments are corrupt and don't act according to the rule of law," he said.

Rapid development has extracted a painful cost from those at the bottom while those at the top are the ones who get richer, he said. Professor Hu cited as an example a case from his home town of Ningde in Fujian province.

Local officials seized villagers' land for a pittance of 49 yuan (S$10) per sq m to build an expressway, and beat up villagers who tried to stop the construction, he said.

Such incidents, he noted, are common across China.

"Social tension in China is escalating because the cake has not been divided equally and those at the bottom feel they are always losing out.

[[nid:124399]]
SUBSCRIBE TO OUR NEWSLETTER
Your daily good stuff - AsiaOne stories delivered straight to your inbox