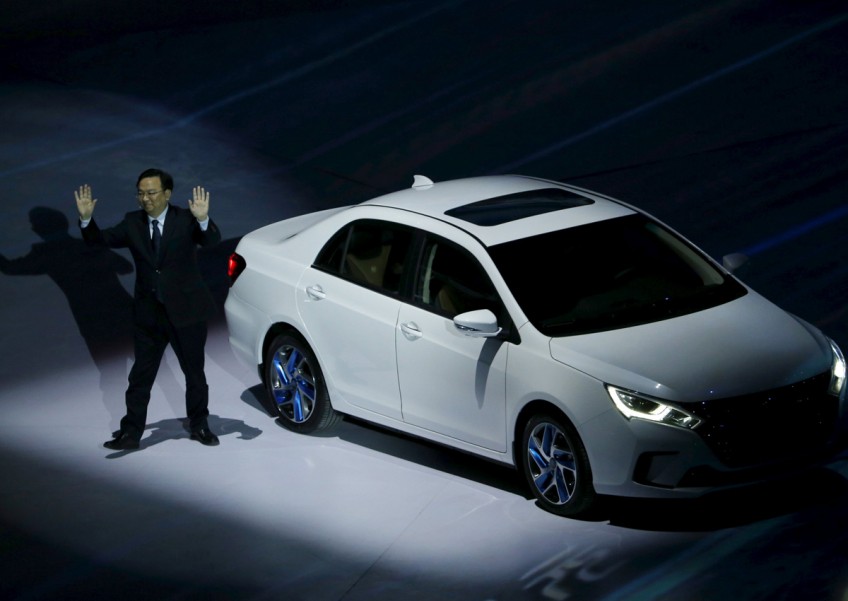 BYD Co Ltd Chairman and President Wang Chuanfu gestures as he gets out of its hybrid electric car "Qin" at BYD Dreamcast conference in Beijing, China, April 11, 2016.
Reuters

Beijing - Electric cars have their highest-profile prophet in US-based entrepreneur Elon Musk and their widest adoption in Norway, but China's vast auto market will decide their worldwide future, experts say.

Top global brands will be fighting it out to electrify buyers at China's premier car show opening Monday in Beijing.

The country is already the world's largest auto market and took the number one spot for electric models last year, with some 247,000 "zero emission" cars sold - quadruple the number in 2014 - according to the China Association of Automobile Manufacturers.

So far only around one per cent of cars owned in China are electric, but authorities are pushing them as a potential solution to the country's crippling air pollution health crisis.

The central government gives buyers subsidies of up to 55,000 yuan (S$11,462) for each car and electric vehicles are exempt from traffic restrictions in China's congested major cities.

While electric cars are becoming more popular worldwide, particularly high-end brands like Tesla, their hefty price tags and restricted driving range mean they are still only a niche market.

Their evolution has been mainly state-subsidised, as in Norway, which has the world's highest penetration at 17 per cent of new sales in 2015.

But experts say winning even a small chunk of Chinese sales - which totalled 24.6 million last year - could be a game-changer for electric cars.

"Given the size of the market, it would be a powerful driver" at a global level, Flavien Neuvy, auto expert at Observatoire Cetelem, told AFP.

Jean-Francois Belorgey, an expert with consultancy EY, predicted that by 2020, up to 750,000 electric cars will be sold in China every year.

"China is perhaps the one place in the world where the automobile industry can achieve the economy of scale needed to bring down costs," he said.

Laurent Petizon, a specialist on the auto market with AlixPartners, added: "If there is a market where electric (cars) can hit enough of a critical mass that batteries will start to be reasonable in terms of price, it's China." China's government aims to have at least five million rechargeable cars on the roads by 2020.

But Ben Scott, an expert in electric cars with IHS, said that target looked "quite optimistic".

"The incentives and subsidies that are being offered to consumers right now will be eventually phased out and will stop by the year 2020," he said.

"We're still in the very early days of the electric car market in China," he added, explaining that recharging infrastructure remained in its infancy, in a "classic chicken and egg problem".

France's Renault plans to release its Fluence ZE in China in 2017, and PSA group will be showing a unique C-Elysee electric sedan at the Beijing show that is also due to be released next year.

Chinese companies have also provided funding for Western firms' development projects, including Britain's Aston Martin and the US's Faraday Future, which sees itself as a possible competitor to Tesla.

But despite the progress, critics say China's electric cars will never be truly green if they are powered by electricity that is generated in carbon-intensive ways.

"It could be argued that you're just moving the CO2 from the exhaust pipe to a power plant somewhere," said Scott.

Belorgey adding that cutting the carbon footprint of China's electricity "will take some time".

"This does not solve the problem of the greenhouse effect, but it addresses the issue of the concentration of particles," he said.