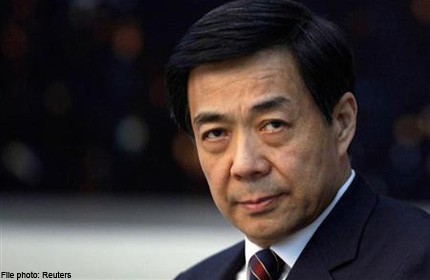 Song Yangbiao, a reporter for the magazine The Time Weekly, was detained on Sunday on charges of "picking quarrels and causing trouble", according to friends and supporters, apparently after using his Sina Weibo microblog to denounce the trial and call for an uprising to oppose it.

Bo was dramatically sacked last year as Communist Party chief of the southwestern city of Chongqing following lurid accusations of corruption and abuse of power.

His trial is expected to begin this month in the eastern city of Jinan.

While Song's Weibo account has now been deleted, records kept on freeweibo.com, run by the anti-China censorship site greatfire.org, showed that Song had made his plea on Saturday for people to protest against Bo's trial.

"All members of the Chinese Communist Party should rise up together to oppose the illegal trial in Jinan," Song wrote, according to freeweibo.com.

Friend Lu Qi said police informed the family on Monday of Song's detention, though he was unable to confirm a direct connection with any posts about Bo.

"There's a lot of speculation about this on the internet at the moment, but I'd personally not seen anything on his Weibo about this," Lu told Reuters.

Wu Danhong, a Beijing law professor and controversial leftist blogger who writes under the pen name Wu Fatian, said he had been told by a family member that Song had been detained"because of something to do with Weibo".

"He is no threat to society," Wu said by telephone, adding he had offered Song his legal services.

A policeman who answered the telephone at the police station in the eastern Beijing suburb of Tongzhou, where Song is being held, said he could neither confirm nor deny the detention.

Song has been a well-known and sometimes outspoken supporter of leftist policies, and of Bo, who is certain to be found guilty at his trial and given a long jail sentence, or possibly the death penalty.

After his appointment as party chief of Chongqing in 2007, Bo turned it into a showcase of revolution-inspired "red"culture and his policies for egalitarian, state-led growth. He also won national attention with a crackdown on organised crime.

His brash self-promotion irked some leaders. But his populist ways and crime clean-up were welcomed by many of Chongqing's 30 million residents, as well as others who hoped that Bo could take his leftist-shaded policies nationwide.

However, while Bo still has many sympathisers within the party, his case is unlikely to cause a major schism, though it may overshadow and slow President Xi Jinping's efforts to push economic reforms.

State media has issued calls for the country to rally behind the party in the prosecution of Bo, but the government has also heavily censored microblogs to prevent discussion of the case and blocked far leftist websites which support Bo.