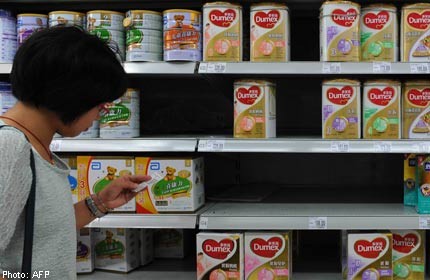 The firms fined were Mead Johnson and Abbott from the US, Dumex, a subsidiary of France's Danone, Friesland of the Netherlands, New Zealand giant Fonterra - at the centre of a health scare this week - and China's Biostime, Xinhua said, citing the National Development and Reform Commission (NDRC).

In a corporate statement, Mead Johnson said it had been handed a penalty of 204 million yuan (S$42 million).

Biostime said in a filing to the Hong Kong stock exchange that it had been given a 163 million yuan fine.

Fonterra, which has had to recall products in several countries this week over a botulism scare, was fined 4.5 million yuan, it said.

It cooperated fully with Chinese authorities and accepted their decision, it said.

"The investigation leaves us with a much clearer understanding of expectations around implementing pricing policies which is useful as we progress our future business plans," Fonterra's president for Greater China and India, Kelvin Wickham, said in a statement.

He added that Fonterra's fine was "in the lowest range" of the penalties handed out.

Xinhua said that three companies - Wyeth, which is owned by Swiss giant Nestle, Japan's Meiji, and Chinese firm Beingmate - had been exempted from punishment in the inquiry.

The NDRC said they provided important evidence and carried out active self-rectification, it added.