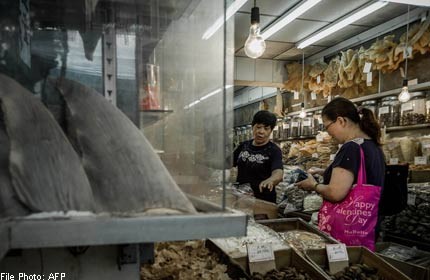 In this file picture taken on September 5, 2012 a customer (R) talks to a shopkeeper at a store selling shark fins (L) in Hong Kong.

HONG KONG - In a narrow Hong Kong street filled with the tang of dried sea creatures, shopkeepers are blaming China's recent corruption crackdown for falling sales of expensive banquet foods such as shark fin and abalone.

Such items have fallen off the menu since China's new leadership came to power demanding austerity from Communist Party and military officials as a means of reigning in graft and dampening public anger over corruption.

Suppliers, restaurants, and hotels in the trading hub of Hong Kong all say the loss of appetite from the mainland has thinned out sales in a market looking for a portion of China's estimated annual 300 billion yuan (US$49 billion) expenditure on state-funded banquets.

On Hong Kong's "Dried Seafood Street", the centre of trade in dried delicacies, shopkeeper Leung Wing-chiu told AFP sales were down 20 per cent at a time when increased ethical awareness over shark fin and rising rents are pressuring business.

"Beijing's frugality campaign has driven money out of my pocket," said the 94-year-old, who is also the Dried Sea Food & Grocery Merchants Association president.

"Demand from mainland buyers, especially hotels and restaurants, has shrunk a lot. This is particularly true for high-end goods such as dried abalone, shark fins and bird's nest."

Leung said China's state-funded banquet culture was a key source of revenue, and while the economic slowdown had affected business over the past few years, "the situation has got a lot worse since the new leadership ascended to power".

Chinese officials have long held lavish liquor-drenched receptions as a way of building business relationships, greasing the wheels of power, and showing off wealth and status.

The Jiu San Society, one of China's eight legally-recognised non-Communist political parties, last year called for a curb on government spending on such banquets, which it estimated at $300 billion a year. Other scholars put the figure even higher.

And in June, President Xi Jinping launched a "thorough cleanup" of the ruling Communist Party, vowing to target extravagance and waste.

The Central Military Commission had already banned lavish banquets for high-ranking officers at the end of last year, while party officials were handed similar new rules.

Zhu Jiangnan, China Studies coordinator at the University of Hong Kong, said banquets were in a "grey area" of corruption.

"Actually, in China, the word 'corruption' (fubai) is linked not only with... graft, bribery, and embezzlement, but also unhealthy tendencies... such as extravagance and waste," she told AFP in an email.

Wong Hiu-wan, a shopkeeper selling bird's nests, which have been used in Chinese cooking for centuries, blamed the directives from Beijing for a slowdown in business.

"Now, we have to count more on local consumers, because orders from mainland hotels and restaurants have gone down dramatically," he said.

And Yeung Wai-sing, the chairman of the Association of Hong Kong Catering Services Management Ltd, also had reason to regret China's newfound abstemiousness.

"For years, this traditional business has been fuelled by orders from mainlanders, who consider dried seafood from Hong Kong to be premium in quality," said Yeung.

"But things didn't turn out well this year."

Tang Palace largely blamed "the issuance of a set of regulations and restrictions to promote frugality and curb waste by the Chinese government, casting an impact on certain customer groups' expenditure".

Xiao Nan Guo said its first-half profit was hit by "the prolonged austerity campaign launched by the Chinese government to curb lavish spending and entertainment".

Others say traditional foods were already losing their attraction.

"The Chinese are turning their eyes towards Western and environmentally-friendly food rather than traditional banquet favourites like abalone and shark fin," said Ren Guoqiang of consultancy Roland Berger & Partner.

Bruce Shou, a student and food enthusiast who routinely visits Hong Kong from Hangzhou to dine at high-end restaurants, agreed.

"Sashimi, beefsteaks and foie gras look fancier to me, whereas abalones remind me of something old-fashioned and bureaucratic," he said.

On top of environmental campaigning against products such as shark fin and Hong Kong's eye-watering rents, the graft crackdown is adding to the pressure on businesses along "Dried Seafood Street".