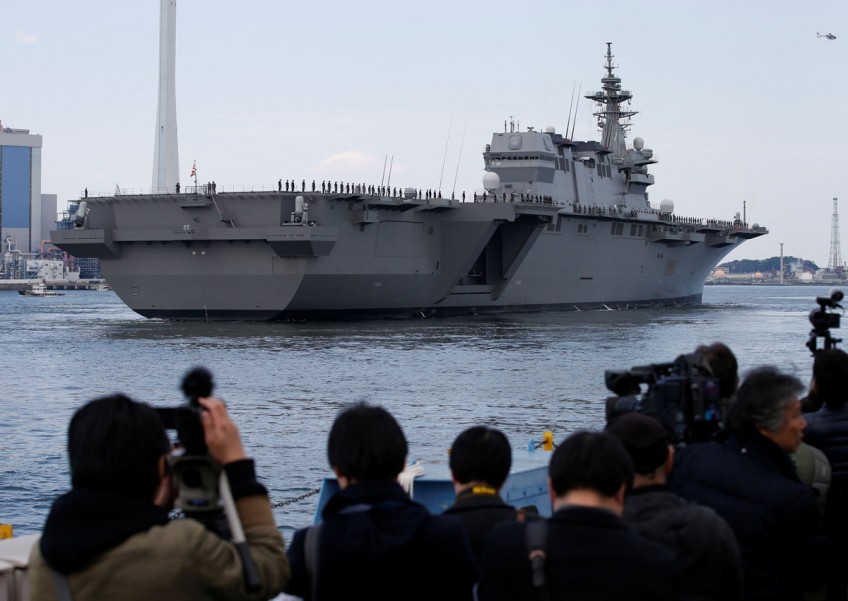 BEIJING - Beijing said on Thursday it has reasons to stay "highly alert" to Tokyo's military moves and the real intentions behind them, one day after a large Japanese escort vessel was commissioned.

The Kaga shares the same name as a Japanese aircraft carrier that was sunk by the United States in World War II.

Japan's Vice-Minister of Defence Takayuki Kobayashi was quoted as saying at the ceremony that "China is attempting to make changes in the South China Sea with bases and through acts that exert pressure'' and is "raising security concerns among the international community".

Reuters reported the Kaga was commissioned at a time when Japan is pushing back against China's growing influence in Asia.

Responding to the report on Thursday, Foreign Ministry spokeswoman Hua Chunying warned that China and other countries around the South China Sea won't let Japan "make waves" in the region.

"Japan cannot represent the international community. The situation in the South China Sea is getting stabilized and better under the joint efforts by China and members of the Association of Southeast Asian Nations," Hua said.

"Japan has been concocting and playing up the so-called China threat in recent years, and seeking and making excuses for its arms expansion," the spokeswoman said. "Due to historical reasons, the international community, especially its Asian neighbours, has been closely watching Japan's military moves."

Hua urged Japan to learn from history. "We hope the reappearance of the Kaga is not the start of Japanese militarism's attempt to come back," she said

Lyu Yaodong, a researcher of Japanese foreign policy at the Chinese Academy of Social Sciences, said Japan has been using China as an excuse to expand its arms, and countries should keep history in mind and stay alert against the "remnants of militarism" in Japan.