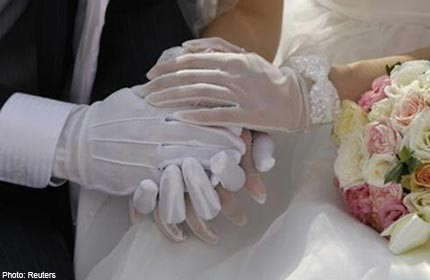 BEIJING - China's anti-graft watchdog is investigating a Beijing official who spent more than 1.6 million yuan (S$325,000) on a lavish three-day wedding for his son, state media said, the latest step in the government's crackdown on waste and extravagance.

Ma Linxiang, a deputy village chief from the Beijing suburb of Qingheying, hosted the estimated 250-table wedding at an upmarket convention centre that was part of the main 2008 Beijing Olympics venue during the week-long National Day holiday last week, Chinese newspapers reported.

Ma told the Beijing News that the wedding was hosted by both families, and that he "couldn't stop" the bride's family from splurging on the venue as well as a troupe of performers that included two celebrities famous for their own lavish wedding.

Since taking office in March, Chinese President Xi Jinping has called corruption a threat to the ruling Communist Party's survival and vowed to go after powerful "tigers" as well as lowly "flies".

Among the "tigers", ousted senior politician Bo Xilai was jailed for life last month after he was found guilty of corruption, taking bribes and abuse of power.

Ma said he only paid for the two days of festivities in his village that cost 200,000 yuan, and that he received a fraction of that back in gifts, the newspaper said.

Wedding guests are traditionally expected to give newly-weds cash, which is often used to defray the costs of the wedding. Ma also said luxury cars used at the wedding were only "borrowed".

The official Xinhua news agency reported late on Monday that district-level anti-corruption investigators were looking into the wedding to see if any laws or rules had been broken.

Ma insisted he was well aware of Xi's anti-graft campaign.

"I'm a village official, I know all about the party's rules and what you should not do, but the bride's family insisted and I couldn't stop them," he told Xinhua.

He described the bride's family as wealthy businesspeople from the eastern province of Jiangsu.

Xi has sought to address growing public anger at the illegal or unethical behaviour of party officials, especially those with flamboyant lifestyles.