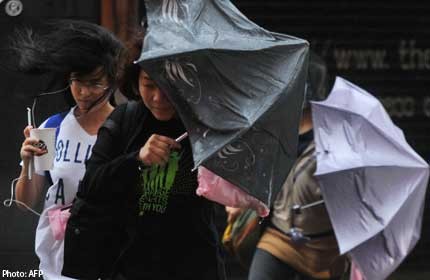 BEIJING - China was on its highest alert for Typhoon Fitow Sunday, with tens of thousands evacuated as the storm was set to slam into the country's eastern coast as early as Sunday night, weather authorities said.

The National Meteorological Centre issued a red alert for the storm, saying it was expected to make landfall in China late Sunday or early Monday in an area between southern Zhejiang province and northern Fujian province.

The storm, which the centre classified as "strong", was located Sunday morning about 360 kilometres southeast of the city of Wenzhou in Zhejiang and moving at a speed of between 15-20 kilometres an hour.

Zhejiang has so far evacuated more than 130,000 people ahead of the expected landfall, state-run news agency Xinhua said.

"We must not leave anybody in danger," Li Qiang, the provincial governor said, requesting local authorities increase inspections of dams and reservoirs as well as safety checks of chemical plants and other important facilities, Xinhua reported.

The typhoon was expected to bring heavy rain and strong winds, Xinhua added, quoting the weather centre as saying it was unusual for a typhoon to come ashore in China's southeast during October, and that it urged authorities and residents to increase their alert levels.

Fitow is named after a flower from Micronesia and comes just two weeks after Typhoon Usagi wreaked havoc in the region.

China's weather warning system consists of four levels, with red the most serious, followed by orange, yellow and blue, according to Xinhua.

Taiwan's Central Weather Bureau issued a warning over the storm Sunday morning as it was barrelling past the north of the island.

A total of 103 international flights were cancelled while 14 flights were delayed. Seventeen ferry services between Taiwan and offshore islands were also terminated.

A total of 670 mountain climbers were advised to scrap their plans as the bureau forecast torrential rains in mountainous areas in the north and northeast.

The bureau said the typhoon has ditched up to 400 mm (16 inches) of rainfall although it is not likely to make landfall on the island. Taiwan's military has ordered more than 20,000 troops to be on standby.