China: Japan defeated not only by atomic bombs 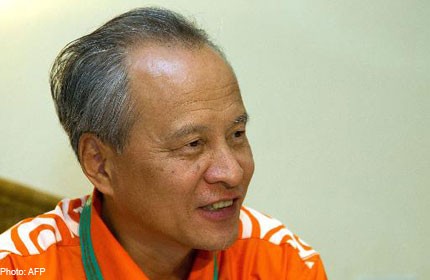 Japan should realize it was defeated in 1945 "not just" by atomic bombs and thus not challenge the post-World War II order, China's ambassador to Washington Cui Tiankai, pictured on August 30, 2012, said.

WASHINGTON - Japan should realize it was defeated in 1945 "not just" by atomic bombs and thus not challenge the post-World War II order, China's ambassador to Washington said Tuesday.

Amid high tensions between China and Japan, Ambassador Cui Tiankai said that such historical perceptions "may be the most important issue" between Asia's two largest economies.

Cui, addressing a forum, criticized as "very wrong and dangerous" a view by "a few politicians" in Japan that their country was forced to surrender in 1945 solely because of the nuclear attacks on Hiroshima and Nagasaki.

"They believe that if you don't antagonize the United States, everything would be okay for them, they don't have to take care of the concerns of other countries," he said at Johns Hopkins University's School of Advanced International Studies.

"Japan was defeated in the Second World War not just by two atomic bombs dropped by the US but by all the peace-loving, anti-fascist countries and people - the peoples of the United Nations - including China and the United States, of course," Cui said.

"I think politicians in Japan have to realize this is the post-World War II international order. You cannot challenge that," he said. Historical issues remain a major sore spot in East Asia, with many Chinese and Koreans accusing Japan of insufficient remorse for its past expansionism in other Asian nations. Japan has apologized for causing "tremendous damage and suffering" in the 20th century, leading some officials in Tokyo to accuse Beijing and Seoul of intentionally keeping tensions on a simmer.

Japan, officially pacifist since the war, has been seeking a permanent seat on the UN Security Council, whose makeup reflects power dynamics in 1945.

Japanese Prime Minister Shinzo Abe, who is known for his conservative views on history, has vowed not to cede any sovereignty over islands in the East China Sea claimed by Beijing.

Japan reverently observes the anniversaries of the bombings of Hiroshima and Nagasaki, which together killed more than 200,000 people. In May, Japan lodged a protest when a South Korean newspaper called the world's only atomic bombings "divine punishment."