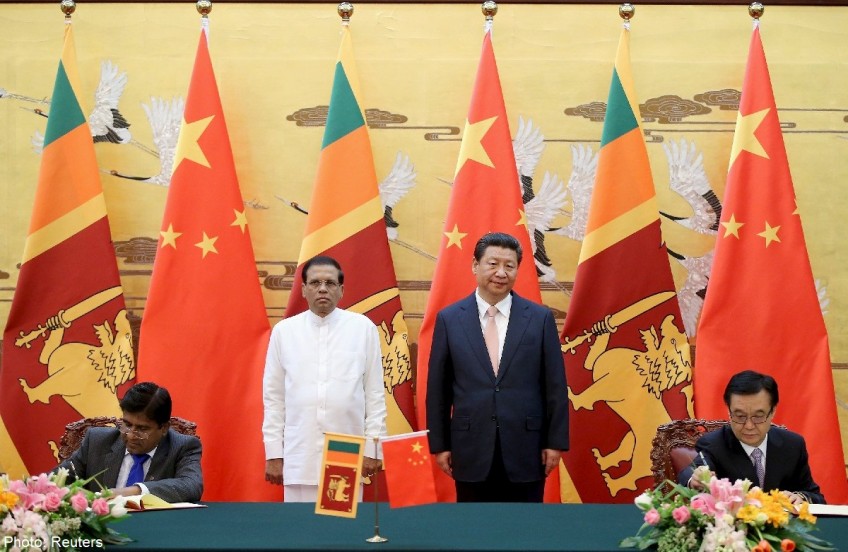 Sri Lankan President Maithripala Sirisena is on his first state visit to Beijing since taking office in January and is working to renegotiate more than US$5.3 billion (S$7.26 billion) worth of Chinese deals signed by his predecessor.

He has already suspended construction work on a major Chinese-funded "port city" commissioned by his predecessor Mahinda Rajapakse, who relied heavily on China to rebuild the country's infrastructure during his decade in power.

At the Great Hall of the People in Beijing Xi spoke of "a new era in the traditional friendship between China and Sri Lanka", telling Sirisena: "Mr President, you are an old friend of the Chinese people." China wants to "push forward, genuinely helping each other in our strategic partnership".

For his part Sirisena recalled his first trip to China in 1983, "at the invitation of the Chinese Communist Party".

Sri Lanka has complained that it is paying too much interest on the Chinese loans funding its infrastructure development.

The US$1.4 billion "port city" land reclamation scheme in Colombo suspended by Sirisena was also considered a security risk by neighbouring India.

Liu said Sirisena described issues around the port city scheme as "rather temporary". "He said the problem does not lie with the Chinese side" and that he hoped the project could continue "after things are sorted out", he added.

Sirisena's remarks could not be immediately confirmed and Chinese officials could be working to downplay the port review.

China has said any disruptions to the project will spook foreign investors and an op-ed in the Global Times, a paper affiliated with the Communist Party mouthpiece People's Daily, reminded Sirisena that "Sri Lanka needs foreign investment more than ever".

"A consistent policy is crucial for attracting foreign investment," wrote Lan Jianxue, of the China Institute of International Studies. "Sri Lanka's strategic goals will be better guaranteed if Colombo can integrate them with China-backed projects." Sirisena has also ordered a review of other Beijing-financed projects and loans amid allegations of corruption.

Sirisena made India - rather than China - his first foreign trip after winning elections in January, seeking to rebuild ties with Delhi.

India was reportedly furious after Chinese submarines were allowed to dock in Colombo last year when Rajapakse was still in power.

Beijing has been accused of seeking to develop facilities around the Indian Ocean in a "string of pearls" strategy to counter the rise of rival India and secure its own economic interests.