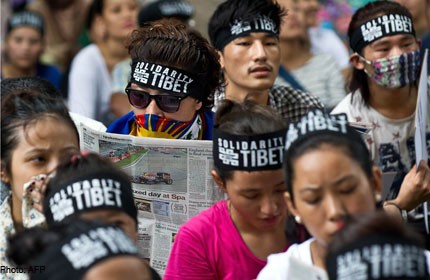 : Tibetan activists stage a sit-in protest in New Delhi on August 26, 2013, to show solidarity with the people of Tibet. Some 120 Tibetans have set fire to themselves since February 2009, mostly in China and at least 90 have died.

BEIJING - Chinese police opened fire on a group of protesters in Tibet, injuring 60, overseas rights organisations said Wednesday, in the latest flare-up over the authorities' tight control of the region.

The demonstrators had gathered on Sunday to demand the release of a fellow Tibetan detained for refusing to fly the Chinese flag, said the UK-based group Free Tibet.

The shooting in Biru county left two protestors in critical condition, it added. One named Tagyal had a broken femur while another called Tsewang was hit in the jaw.

"Over recent months there has been an increase in the frequency and severity of violence by the security forces," Free Tibet director Eleanor Byrne-Rosengren said in a statement.

The US-based group International Campaign for Tibet (ICT) said it was unclear if the shots were live rounds or tear gas but also said 60 people were hurt, citing Tibetan sources.

A policeman at Biru county public security bureau denied any incident to AFP, saying: "No protest, no one injured."

A week earlier officials in the same area had requested Tibetan monasteries and households fly the Chinese flag for the October 1 National Day, ICT said.

During a resulting confrontation security forces beat protestors and detained about 40 people, both rights groups said.

Authorities could not immediately be reached for comment by AFP.

Police in the neighbouring province of Sichuan also fired on Tibetans marking the 78th birthday of their exiled leader the Dalai Lama in July, ICT said. The incidents follow a string of self-immolations in Tibet and neighbouring provinces by about 120 people since 2009.

The acts of protest peaked during China's once-a-decade leadership handover in November last year but have fallen off in recent months.

Beijing condemns the self-immolations and says the Dalai Lama uses them to further a separatist agenda.

The Nobel Peace laureate, who has lived in exile in India since 1959 after a failed uprising in Tibet, has said he is powerless to stop what he has called acts of desperation.

But Beijing says it has brought massive investment to the relatively undeveloped region.