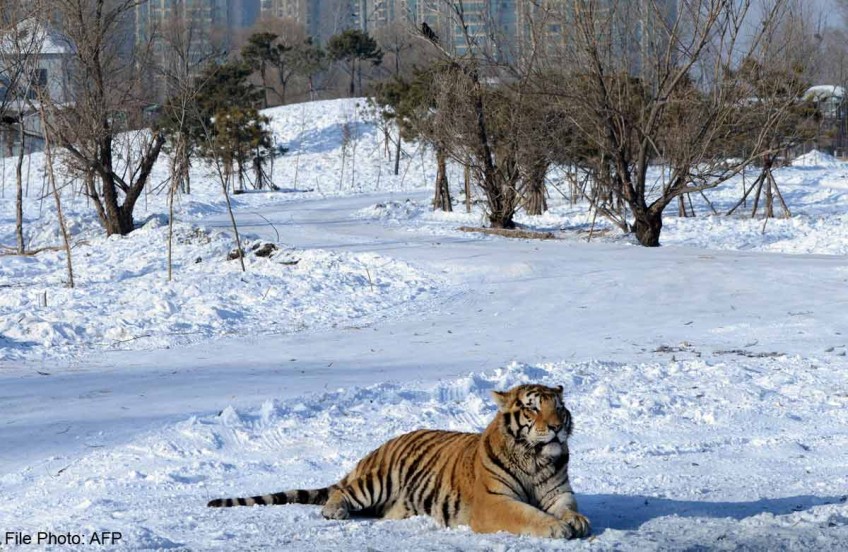 BEIJING - Three local politicians in China raised at least 11 endangered Siberian tigers, state media reported Thursday after one of the animals jumped to its death from a high-rise building.

The cub leapt from the 11th floor of an apartment building in the eastern city of Pingdu last month when it was spooked by fireworks set off to celebrate the Chinese New Year, officials said.

Investigations revealed that the seven-month-old cub was being raised by Yang Wenzheng, a member of a municipal People's Congress, the Communist-controlled local legislature, state broadcaster CCTV reported, citing officials.

With one of his fellow deputies, Yang had obtained two tigers from a third councillor, who had eight of the animals but found the costs of raising them - 1,600 yuan ($260) per day in total - too expensive to bear.

Tiger meat and bones are said to have curative properties in traditional Chinese medicine and farming them can be lucrative - the China Daily said tigers can fetch 1 million yuan on the black market.

East Russia and China's northeast are home to the the big cats, also known as Amur tigers.

Hundreds of them once roamed the lush pine and oak forests of Manchuria, but due to centuries of poaching only a couple of dozen are believed to still survive in China.

All three have resigned from the municipal People's Congress and were each fined 3,000 yuan for the "bad impact" of raising tigers without official permission, but were not prosecuted, the reports said.

CCTV reported that the surviving animals have been moved to a local zoo.