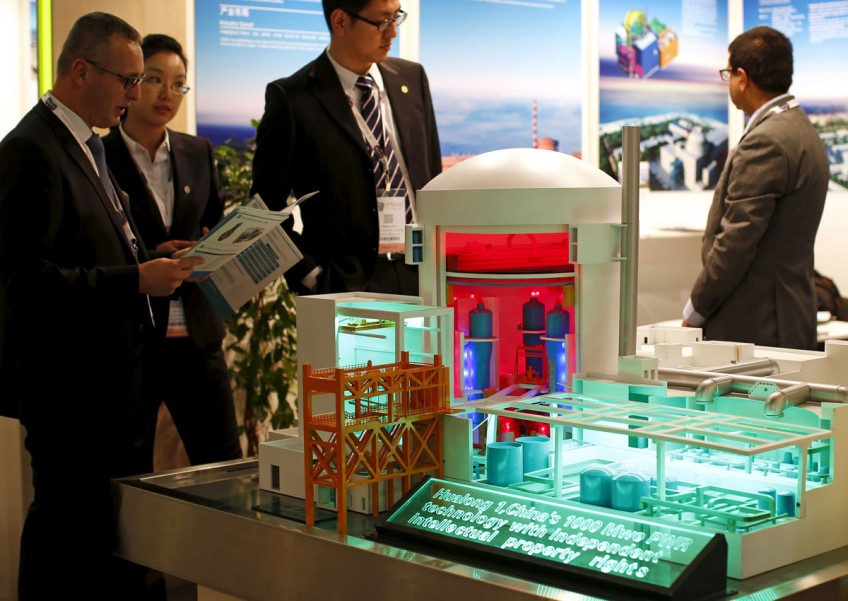 China has vowed to ensure the safe and peaceful use of floating nuclear power plants, though its nuclearenergy chief did not rule out deploying them in disputed waters like the South China Sea.

Speaking at a briefing yesterday where he unveiled China's first White Paper on tackling nuclear emergencies, China Atomic Energy Authority chairman Xu Dazhe said these offshore plants will undergo a "careful and scientific" feasibility review before they are deployed.

He said floating plants - which could be deployed for offshore oil or gas exploration, or on islands and in coastal areas - would help address China's energy needs and environmental protection pressures.

"To achieve our goal of becoming a maritime power, we will have to exploit our maritime resources fully," he said. "But be assured that China will stick to the safe and peaceful use of nuclear power and that development of maritime resources will benefit people in the area."

He was responding to a question by The Straits Times on whether China would deploy its floating nuclear plants in disputed waters. Since 2014, China has turned reefs into artificial islands in the disputed South China Sea through land reclamation and has constructed facilities like airstrips on them.

China has reportedly included the building of two such plants by China General Nuclear Power Corporation (CGN) and China National Nuclear Corporation (CNNC) in its 13th five-year plan for 2016-2020. The CNNC plant is expected to start operations in 2019, with CGN's to start in the following year, said the two companies earlier this month.

China is the second nation to construct floating reactors for civilian purposes. Russia is building the Akademik Lomonosov reactor, which may start operations next year.

While there are concerns over access for personnel and equipment, for instance, and the need to prevent radioactive materials from entering the sea, energy expert James Conca said floating reactors have their merits. "Being able to bring power to a site for specific purposes, then move on to another site, has logistical benefits," he wrote in a blog on the Forbes website on Jan 18.

Yesterday, Mr Xu said the White Paper was necessary to boost safety and prevent nuclear emergencies as China ramps up the building of nuclear plants, even as he highlighted its accident-free record since operating its first nuclear plant in 1985.

Actions listed in the document include: enacting laws such as the Nuclear Safety Law and Atomic Energy Law, stepping up emergency drills and beefing up international co-operation and exchanges.

But the pace of building, which resumed last year after a four-year suspension in the wake of the meltdown at Japan's Fukushima plant in March 2011, has triggered concerns among even Chinese experts.

Dr He Zuoxiu, a theoretical physicist at the Chinese Academy of Sciences, told the Global Times tabloid last year that China lacks expertise in safety control technology and should focus more on other clean energy sources such as wind and hydropower instead.

But Dr Lin Boqiang, director of Xiamen University's Energy Economics Research Centre, said the White Paper is comprehensive in its plans to prevent and tackle nuclear emergencies, having drawn lessons from the Fukushima disaster, and the key to success of the White Paper proposals lies in the implementation.

Set up a new national nuclear emergency rescue team of about 300 members, who will respond to serious nuclear accidents and take part in international rescue operations.

Provincial-level exercises to be held once every two to four years and nuclear plant operators to hold exercises once every two years. Eight national-level nuclear emergency technical support centres have been set up to take care of areas such as radiation monitoring and prevention and medical rescue.

Accurate and official information to be released to the public by the central and local governments and nuclear plant operators in accordance with international practice and China's laws and regulations, and in "an open, transparent and timely manner".

An emergency 24-hour, on-duty system to be established to ensure that each level of the nuclear emergency organisation can be mobilised immediately.

This article was first published on Jan 28, 2016.
Get a copy of The Straits Times or go to straitstimes.com for more stories.