China says has shown restraint in South China Sea, could have seized other islands 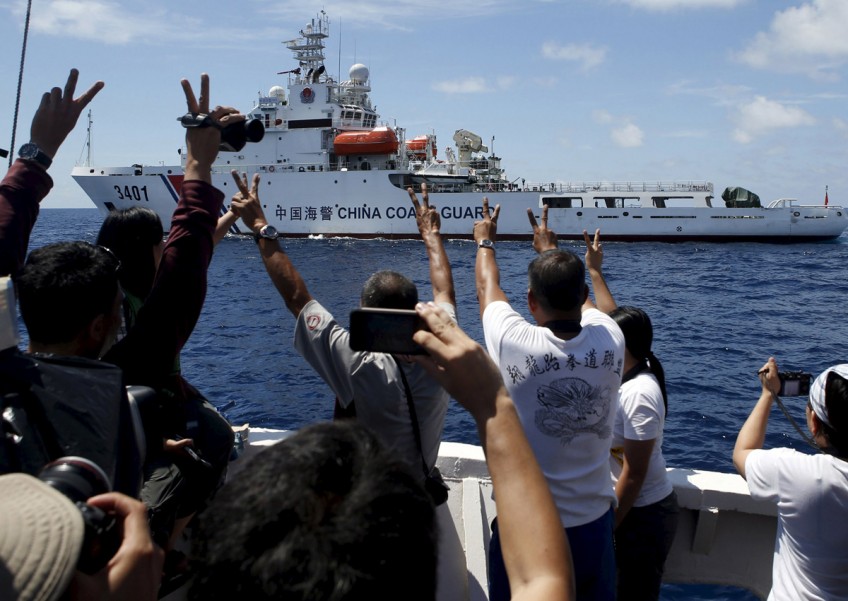 An aerial view shows the Pagasa (Hope) Island, part of the disputed Spratly group of islands, in the South China Sea located off the coast of western Philippines July 20, 2011.
Reuters

China has shown "great restraint" in the South China Sea by not seizing islands occupied by other countries even though it could have, a senior Chinese diplomat said on Tuesday ahead of two regional summits where the disputed waterway is likely to be a hot topic.

Beijing has overlapping claims with Vietnam, the Philippines, Malaysia, Taiwan and Brunei in the South China Sea, through which US$5 trillion (S$7.11 trillion) in ship-borne trade passes every year.

Reclamation work and the building of three airfields and other facilities on some of China's artificial islands in the Spratly archipelago has alarmed the region and raised concern in Washington that China is extending its military reach deep into maritime Southeast Asia.

But China was the real victim as it had had "dozens" of its islands and reefs in the Spratlys illegally occupied by three of the claimants, Chinese Vice Foreign Minister Liu Zhenmin told a news conference in Beijing.

He did not name the countries, but all claimants except Brunei have military fortifications in the Spratlys. "The Chinese government has the right and the ability to recover the islands and reefs illegally occupied by neighbouring countries," Liu said. "But we haven't done this. We have maintained great restraint with the aim to preserve peace and stability in the South China Sea." Tensions over the South China Sea are likely to dominate the East Asia Summit in Kuala Lumpur later this week.

While not on the formal agenda of the Asia-Pacific Economic Cooperation (APEC) summit on Wednesday and Thursday in Manila, the South China Sea is expected to be discussed on the sidelines.

US President Barack Obama, who arrived in Manila on Tuesday, will attend both meetings. Chinese President Xi Jinping is in Manila for APEC while Premier Li Keqiang will represent China in Malaysia.

Liu said China did not want the South China Sea to be the focus of the East Asia Summit. But he noted it would be hard to avoid and that some countries would raise it.

China's island building in the Spratlys was not about militarisation, Liu said, adding for example that too much attention had been placed on the length of China's airstrips.

Satellite photographs show construction is finished on a 3,000-metre-long (10,000-foot) airstrip on Fiery Cross Reef. Security experts say such an airfield would be able to accommodate most Chinese military aircraft. "Actually, the larger they are, the more civilian benefits they will bring," Liu said, pointing to the disappearance of Malaysian Airlines flight MH370 last year as evidence of the poor state of search and rescue capabilities in the South China Sea. Rescuers initially focused their search on the waterway before moving to the Indian Ocean.

Liu also repeated Beijing's standard line that while China's building work is for defence, its main focus is civilian.

China is building facilities such as lighthouses, while protecting the environment, Liu added.

He said the focus of the East Asia Summit should be development. "Hyping the South China Sea issue is not conducive to co-operation," Liu said.

Disagreement between the United States and China over how to address rival claims in the South China Sea marred a gathering of regional defence ministers earlier this month, with a joint statement scrapped after officials failed to agree on its wording.

The United States had lobbied for inclusion of a reference to the waterway, while China had argued it had no place in the statement.

Despite tensions between Beijing and Washington over the issue, the Chinese and US militaries are still maintaining cordial relations and open lines of communication, with a US warship docking in Shanghai on Monday.