China tells US to stay out of South China Seas dispute 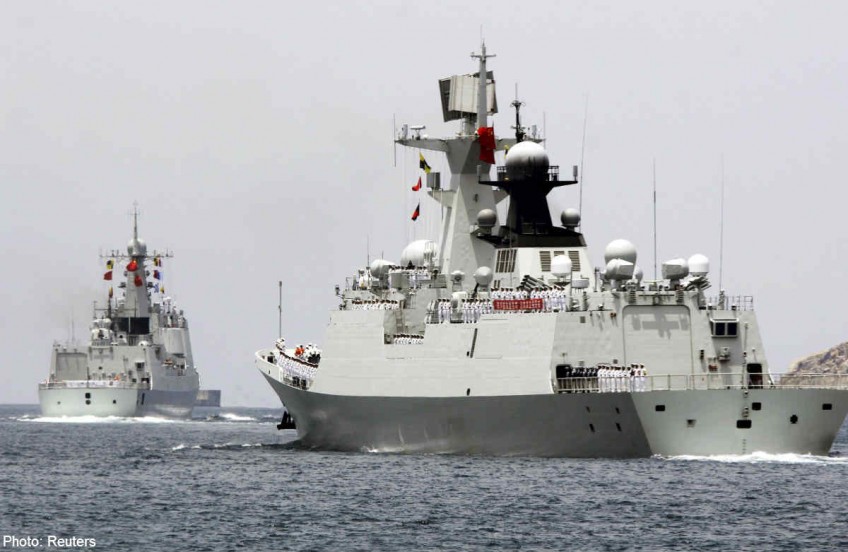 BEIJING - China told the United States on Tuesday to stay out of disputes over the South China Sea and leave countries in the region to resolve problems themselves, after Washington said it wanted a freeze on stoking tension.

Michael Fuchs, US deputy assistant secretary of state for Strategy and Multilateral Affairs, said no country was solely responsible for escalating tension in the region. But he reiterated the US view that "provocative and unilateral"behaviour by China had raised questions about its willingness to abide by international law.

China claims 90 per cent of the South China Sea, which is believed to contain oil and gas deposits and has rich fishery resources. Brunei, Malaysia, the Philippines, Vietnam and Taiwan also lay claim to parts of the sea, where about US$5 trillion (S$6 trillion) of ship-borne trade passes every year.

China's Foreign Ministry repeated that it had irrefutable sovereignty over the Spratly Islands, where most of the competing claims overlap, and that China continued to demand the immediate withdrawal of personnel and equipment of countries which were "illegally occupying" China's islands. "What is regretful is that certain countries have in recent years have strengthened their illegal presence through construction and increased arms build up," the ministry said in a statement.

China would resolutely protect its sovereignty and maritime rights and had always upheld resolving the issue based on direct talks with the countries involved "on the basis of respecting historical facts and international law", it added.

China "hopes that countries outside the region strictly maintain their neutrality, clearly distinguish right from wrong and earnestly respect the joint efforts of countries in the region to maintain regional peace and stability", it added, in reference to the United States.

Anti-Chinese riots erupted in Vietnam in May after China's state oil company CNOOC deployed an oil rig in waters also claimed by Hanoi.

Relations between China and the Philippines have also been tested in recent months by their dispute over a different area.

A Foreign Ministry spokesman in Manila said the Philippines strongly supported the US call for all sides to stop aggravating the tension.

The United States wants the 10-nation Association of South East Asian Nations (ASEAN) and China to have "a real and substantive discussion" to flesh out a call for self-restraint contained in a Declaration of Conduct they agreed to in 2002, with a view to signing a formal maritime Code of Conduct, Fuchs said.

A US official said the issue was raised again last week with China at an annual Strategic and Economic Dialogue, a bilateral forum that seeks to manage an increasingly complex and at times testy relationship.

China's Foreign Ministry said that it and ASEAN were carrying out the Declaration of Conduct and "steadily pushing forward" talks on the Code of Conduct.