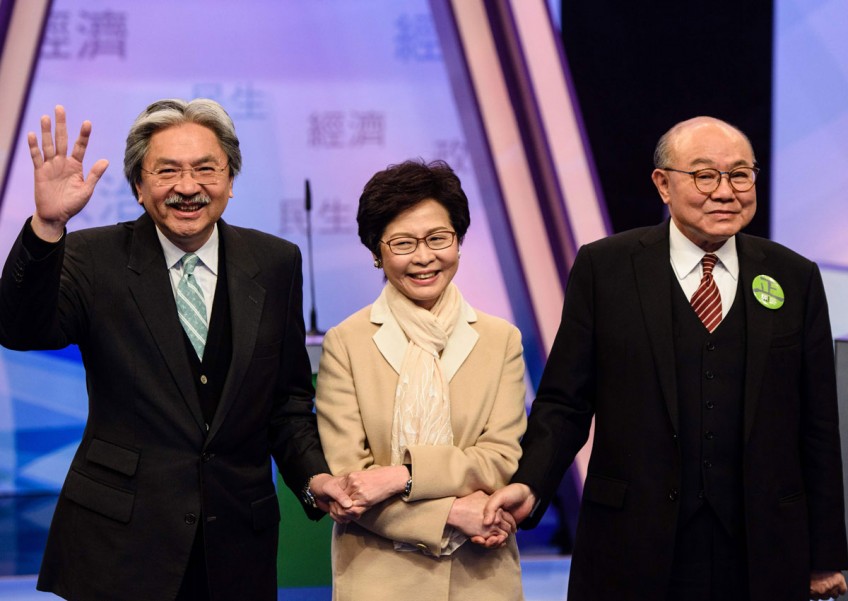 Hong Kong's three leadership candidates (L-R) John Tsang, Carrie Lam and ex-judge Woo Kwok-hing join hands as they arrive at a studio before facing off in their first televised debate in Hong Kong on March 14, 2017.
AFP

Hong Kong will select a new leader on Sunday in a vote skewed towards Beijing that has once more opened up the city's political divisions.

Pro-democracy campaigners describe the election process as a farce and predict weekend protests as the prospect of political reform in the semi-autonomous city appears more unattainable than ever.

Hong Kong's next leader will be chosen by an electoral committee rather than the general public and the person selected has to be formally approved by Beijing.

The majority of the 1,194 representatives on the committee belong to pro-establishment special interest groups such as agriculture and real estate which lean towards China. Only a quarter come from the pro-democracy camp.

It is the first leadership election since mass rallies in 2014 calling for Hong Kong residents to have the right to vote for the city's highest-ranking official failed to win change, and comes as concerns grow that Chinese authorities are tightening their grip.

Former deputy leader Carrie Lam is seen as Beijing's favourite for the job, and some pro-establishment members of the electoral committee say they have come under pressure to vote for her.

Lam is intensely disliked by the pro-democracy camp after promoting the Beijing-backed political reform package which prompted 2014's "Umbrella Movement" that paralysed parts of the city for more than two months.

The proposal had promised a public vote for city leader in 2017, but said candidates must be vetted. It was dismissed as "fake democracy" by opponents and rejected in parliament by pro-democracy lawmakers.

Since then the political reform process has been shelved.

Those opposed to Lam cast her as just another version of unpopular current leader Leung Chun-ying.

Her main rival is ex-finance chief John Tsang, perceived as a more moderate establishment choice and the public's clear favourite in opinion polls.

Known as "Mr Pringles" for his resemblance to the moustachioed crisp brand mascot, Tsang has cast himself as a unifying candidate.

Most pro-democracy members on the electoral committee will vote for Tsang to keep Lam out and did not field their own candidate for fear it would split the anti-Lam vote.

That leaves the third and most liberal nominee, former judge Woo Kwok-hing, who is unlikely to make a dent.

But many young activists reject the vote outright.

Pro-democracy campaigner Joshua Wong, the face of the 2014 protests, says he does not endorse any of the candidates and will join protests outside the harbourfront voting venue.

"Hong Kong is just implementing a selection, rather than an election," 20-year-old student Wong told AFP, describing all three nominees as pro-establishment.

"No one will deny that Carrie Lam is the worst one and a nightmare for us - but it doesn't mean we can put aside our principles and endorse any pro-China candidate," he said.

Lam has questioned whether the environment is right for reintroducing the political reform debate, while Tsang says any changes must adhere to the unpopular framework laid down by Beijing.

There was little scope for any new leader to diverge from Beijing's script, said Yvonne Chiu, assistant professor at Hong Kong University's department of politics and public administration.

"The chief executive internally can do a lot of things, but at the same time will always have an eye on what Beijing is interested in and what Beijing is willing to accept," said Chiu.

China is taking an increasing interest in the way Hong Kong is governed after a turbulent five years under Leung, added Chiu.

Following the failure of the "Umbrella Movement" to win reform, a new brand of activist advocating a split from the mainland rather than just greater autonomy has emerged, sparking fury from Beijing.

Hong Kong is governed under a semi-autonomous "one country, two systems" deal since being handed back to China by Britain in 1997.

China's premier Li Keqiang shut down any notion of Hong Kong independence last month, saying the idea "would lead nowhere", and each of the three candidates has also rejected the idea.

China's Ministry of Foreign Affairs office in Hong Kong described Sunday's vote as not only a concern for the city "but also the central government's exercise of sovereignty and governance over Hong Kong".

Although Lam is a divisive figure, some say Beijing sees her as a softer touch than Leung but still able to deliver hardline policies.

"It's really a sexist view in Beijing's eyes I think - a 'woman's touch'," said Suzanne Pepper, honorary fellow at the Chinese University of Hong Kong.

But for activist Wong, the fight for a more representative political system remains a priority.

"Without democracy, political struggle and instability will still continue in the future," he said.