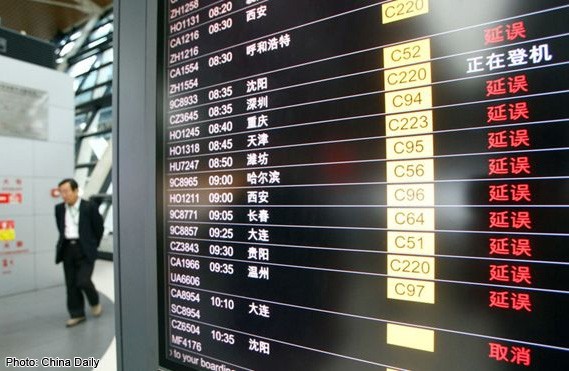 The screen in Shanghai Pudong Airport shows many flights delayed in this file photo.

China's airports are the least punctual on earth, according to FlightStats, a US-based air travel information service, the South China Morning Post reported.

FlightStats said seven airports on the Chinese mainland are at the bottom of a list of 61 major world airports for punctuality.

Other Chinese airports on the bottom of the list are Shenzhen Bao'an Airport, Guangzhou Baiyun Airport, Chongqing Airport and Beijing Capital International Airport.

Civil aviation expert Zou Jianjun said that the management of China's airports has not kept up with the demand, and flights tend to cluster in certain airports.

"The flight lines are concentrated in cities such as Beijing, Shanghai and Guangzhou, and it poses a big challenge to the managers", said Zou.

"Even a minor mistake that happens in any of these large airports may affect flights in other cities."