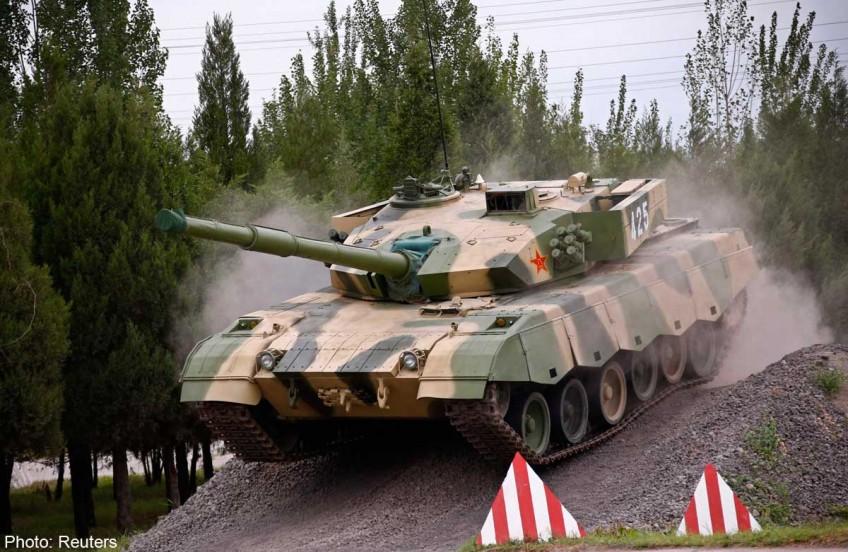 A tank is driven down a slope during an organised media tour at a People's Liberation Army (PLA) engineering academy in Beijing July 22, 2014.

CHINA - The Chinese military is researching converting its armored fighting vehicles into unmanned ones, according to a senior officer of the People's Liberation Army.

"Unmanned ground vehicles will play a very important role in future ground combat. Realizing that, we have begun to explore how to refit our armored vehicles into unmanned ones," said Major General Xu Hang, president of the PLA Academy of Armored Forces Engineering in Beijing.

"Though we have yet to develop unmanned tanks, I think it is an irreversible trend that computers will gradually replace humans to control those fighting machines."

Xu made his remarks during an open house event for domestic and overseas reporters on Tuesday that displayed the achievements of China's military buildup and showed the PLA's transparency.

According to Meng Hong, deputy director of the centre, the United States has invented a series of unmanned ground vehicles and put them to use in wars in Iraq and Afghanistan. They enable military personnel to investigate suspicious objects or perform other tasks in dangerous scenarios from a safe distance.

She noted that Chinese engineers have developed some unmanned military vehicles, but they have not been widely used by the PLA.

China has a full product chain of tanks and armored fighting vehicles, boasting domestically developed engines and weapons that are as advanced as those used by Western militaries, said a publicity officer with the contractor who declined to be named, citing company policy.

His words were echoed by Colonel Yu Kuilong, a senior tank researcher at the academy.

"Our ground forces have been upgrading their tanks and armored vehicles over the past years," he said. "Their new tanks are way better than what they had used since the 1960s in terms of maneuverability, firepower, control systems and users' comfort."

The academy has made huge strides in technological innovation, according to Senior Colonel Li Shengli, chief of the academy's training department.

Researchers at the academy developed cutting-edge driving and shooting simulators, which have enabled junior-grade students to gain experience of what it's like to operate a tank or armored fighting vehicle before they touch real ones, he said.

Xu, the general, said that the academy spends at least 200 million yuan (S$40.0 million) a year on the research and development of new armaments.