Guangzhou resident Su Yu used to search out Taiwanese fruit because she thinks it is healthier than produce from the mainland.

But even before Beijing banned a range of food imports from the island earlier this month, she said it was becoming hard to find.

“Fruit with Taiwanese origin labels, I have the impression that I haven’t seen any for a very long time,” said Su, a translator for a Japanese-owned company in the port city northwest of Hong Kong.

The task is only going to become more difficult in coming months. China banned Taiwanese breads, citrus fruits and packaged tea after US House Speaker Nancy Pelosi defied warnings with a whirlwind visit to Taiwan, a self-ruled island Beijing regards as a renegade province that must be reunited with the mainland.

Countries that have diplomatic ties with Beijing, including the US, acknowledge the one-China principle that holds Taiwan is part of China, but Washington opposes any attempt to take the island by force.

In dollar terms, the bans on agricultural exports amount to just 0.2 per cent of Taiwan’s total exports to mainland China, according to French investment bank Natixis. But for consumers like Su, it is likely to be a disappointment.

Diners in Hong Kong and the mainland like Taiwan’s mix of flavours, often a blend of Japanese cuisine and accents from different regions of China rather than that of a single area, such as Sichuan or Shanghai, said Jolly Chan, a Taiwanese foodie who has lived in Hong Kong for 36 years.

Taiwanese fruit and tea leaves are grown at high altitudes using Japanese farming techniques that were considered “advanced” when Tokyo colonised the island from 1895 to 1945. Today, they taste more subtle or earthy than mainland counterparts, she said.

“People here think the fare from Taiwan is quite special, not like what they get in Guangdong and not the same as in Sichuan,” Chan said. “A lot of it has a more fragrant note.”

In Hong Kong’s Causeway Bay district – home to everything from street food stalls to upscale eateries – Pun’s Food easily fills its 40-plus restaurant seats during peak times and often has a line snaking out the door.

The four-year-old restaurant imports 90 per cent of its food from Taiwan, notably pineapples, mangoes, rice noodles, squid balls and two types of tea – green and oolong. A photo showing Taiwan’s former president Ma Ying-jeou decorates one of the restaurant walls.

A block away at the Wheat Cake bakery, Susan Chang grabs six pastries coated in matcha tea powder on an afternoon work break. The beauty salon employee said she was drawn in by the sign: “Taiwan old-fashioned flavour”.

“That should mean it takes you back to the source,” said Chang, 32.

At a shopping centre kiosk operated by the Hong Kong-based Ying Kee Tea House, Taiwan oolong sells for more than HK$200 (S$35) for a fist-sized sack, nearly three times the price of similar types of tea from Fujian province. Fujian sits across the strait from Taiwan and has a similar climate.

Hong Kong did not ban Taiwanese farm goods in sync with the mainland, but the city’s leader has pledged to help Beijing with “all necessary measures ” to support national sovereignty.

A Hong Kong Trade and Industry Department spokesperson declined to say whether the territory was considering any bans on Taiwan imports. 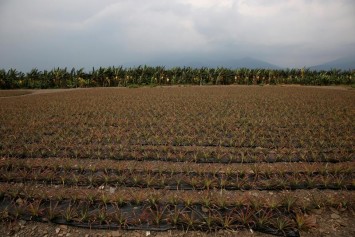 Taiwan exports about a quarter of its annual 57,000 metric-tonne custard apple crop and 95 per cent of shipments go to the mainland, according to data from the Taiwan Council of Agriculture.

The mainland market also accounts for 90 per cent of Taiwan’s pineapple exports, and almost all exported wax apples.

Li Zong, a merchant at the Jiangnan wholesale fruit and vegetable market in Guangzhou, the largest of its kind in China, believes no one is importing Taiwanese pineapples, wax apples and custard apples any more. He said those fruits had been scarce for two years.

But with cross-strait tensions at new highs, that is unlikely to change any time soon.

“You can find replacements [that are grown] in the mainland,” Li said.