HONG KONG - Xi Jinping's every word is being closely watched during his first visit to politically divided Hong Kong as China's leader, but his wife is stealing some of the spotlight in a soft power push by Beijing.

First lady Peng Liyuan has made headlines for her dress sense and charm as she meets members of the public, while Xi is sticking to more formal visits, including a massive military parade and a meeting with police trainees.

The couple arrived in the bustling financial hub Thursday to mark 20 years since the city was handed back to China by Britain, at a time when tensions are high over Beijing's encroaching influence on the semi-autonomous city. 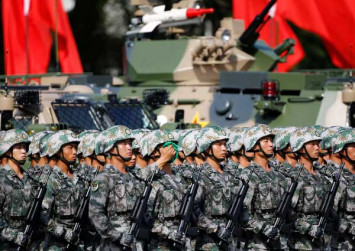 The wives of Chinese presidents have traditionally been far less prominent publicly than their counterparts overseas, particularly US first ladies.

Xi is not scheduled to meet regular citizens during the three-day trip to Hong Kong, a task that has been taken on by his celebrated soprano singer spouse who visited a kindergarten and elderly home in the first two days.

She has received a warm welcome on social media, even on traditionally sceptical forums.

"Although I'm not a fan of Xi, his wife is definitely more than presentable," one user commented on the website of the usually anti-China Apple Daily website.

Others called her "dignified and noble" and "a real beauty." Peng emerged from the plane Thursday holding hands with Xi, wearing a high-collar white striped jacket paired with a beige skirt and an upswept hairstyle.

Later that day she visited kindergarten students and handed out gifts as they played.

On Friday, as Xi oversaw a massive military parade in rural Hong Kong, Peng visited an elderly home wearing a dark-coloured belted dress adorned with a flower brooch as residents praised her for being "smart" and "pretty".

But some observers criticised the visits as exploiting more vulnerable members of society to stage a show.

"Little children don't understand what's happening, only that a stranger auntie is giving them presents," one social media user commented on Facebook.

"Brainwashing starts from kindergarten. How scary," another said.

Peng was a well known folk singer and rose to superstardom performing at gala shows belting out patriotic lyrics.

She has rarely performed since Xi rose to the presidency, instead accompanying him on trips abroad and speaking at events on health and philanthropy within China.

She performed in Hong Kong at the celebration of the 10th anniversary of the 1997 handover, wearing a lavish pink and red gown.