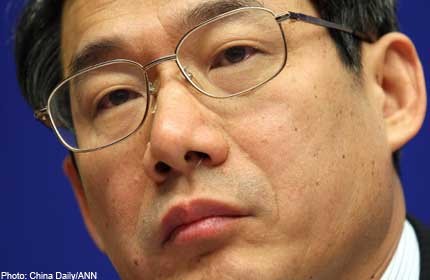 CHINA - The former vice-minister of the National Development and Reform Commission has been expelled from the Party and handed over to judicial authorities for further investigation, the Party's graft-fighting watchdog announced on Thursday.

Liu Tienan, 59, who was also former head of the National Energy Administration, was found to be taking advantage of his post to seek gains, and accepting bribes, according to the Central Commission for Discipline Inspection of the Communist Party of China.

The commission also accused Liu of abusing his power to seek benefits for his relative's businesses, and being "morally degenerate". No details were given.

The commission said in a statement that Liu's activities seriously violated Party discipline and might have broken the criminal law, so the case has been transferred to judicial authorities for further investigation.

Liu headed the National Energy Administration from December 2010 until he was removed from the post in March this year after allegations against him were posted online.

Luo Changping, deputy editor-in-chief of Caijing magazine, said in a post on Dec 6 that Liu had committed multiple offenses including helping a businessman get loans from banks, and in return the businessman offered a large amount of money to Liu's son.

Luo said in May that the whistle-blower was Liu's mistress, who had a dispute with Liu after years in an intimate relationship. China Daily could not reach Luo for comments on Thursday.

A source close to the National Energy Administration who did not want to be named said a group of retired high officials with the administration, including Liu's predecessor Zhang Guobao, reported Liu's corruption, which led to Liu stepping down.

Zhu Lijia, a professor of public administration at the Chinese Academy of Governance, said anti-graft efforts have been strengthened, especially after the Party's 18th National Congress in November, and the Internet is playing a positive role.

Since November, at least eight ministerial-level officials have been under disciplinary investigation, "which reflects the leaders' resolution in fighting graft", he said.

Zhu said the Internet has provided an important platform for the public to supervise officials.

An energy industry insider, who spoke on condition of anonymity, said Liu's alleged corruption had brought obstacles to the energy sector.

The 12th Five-Year Plan (2011-15) for the power grid industry has not been mapped, which has become a "joke" in the industry since it is still under discussion when half the five-year period has passed, he said.

"There is a huge game behind such a delay," he said. "The new leaders of the National Energy Administration are working to implement the plan soon, which I believe is good for the industry."