HONG KONG (AFP) - President Xi Jinping arrives in Hong Kong on Thursday (June 29) to mark 20 years since it was handed back to China by Britain, a trip that has already riled democracy activists in the politically divided city.

The three-day visit is his first since becoming leader in 2013 and comes at a time when there are growing fears that Beijing is threatening semi-autonomous Hong Kong's freedoms.

Leading pro-democracy campaigners including Joshua Wong were arrested on Wednesday night after staging a protest outside the convention centre that will host some of the anniversary events, a stone's throw away from the hotel where Xi will be staying.

The surrounding area has been cordoned off by giant water-filled barricades and police have said they are taking "counter terrorism security measures" to ensure Xi's safety.

Protesters are likely to be restricted to zones well away from the official celebrations.

Animosity towards Beijing has grown in recent years, particularly among young people.

The failure of mass rallies in 2014 to win democratic reform has sparked a new wave of "localist" activists, keen to emphasise Hong Kong's own identity, with some calling for a full split from the mainland.

Since the return to China in 1997, the city has been governed under a "one country, two systems" deal that gives it rights unseen on the mainland, including freedom of speech and an independent judiciary.

But there are now concerns Beijing is trampling the agreement by interfering in a range of areas, from politics to education and media.

Chinese authorities and local officials insist Hong Kong's semi-autonomous status is intact, but have railed against calls for self-determination or independence.

Xi's visit will culminate in the inauguration of new city leader Carrie Lam.

She has promised to heal divisions but has already alarmed critics by saying children should be instilled with Chinese identity from a young age and suggesting that independence activists could face punishment under the law. 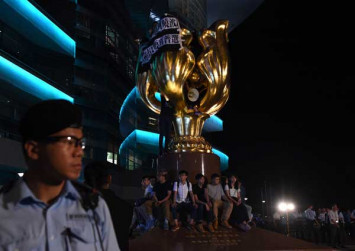 A Beijing-backed framework for what would have been the city's first public leadership election sparked the protests of 2014 after it said candidates must be vetted.

Since then, the debate on promised democratic reforms has stalled with Lam saying she is unsure the time is right to revisit it.

She has said she wants to focus on livelihood issues instead, in a city where the wealth gap is at a record high and many cannot afford decent housing, fuelling tensions.

Xi's trip will also include a visit to China's People's Liberation Army garrison in Hong Kong, which defends the city.

There were fears ahead of the handover that the army would be heavyhanded, particularly after the brutal crushing of democracy protests in Tiananmen Square in 1989.

But the Hong Kong garrison has kept a very low profile in the past 20 years.

Xi is due to fly out of Hong Kong on Saturday, after Lam's inauguration.