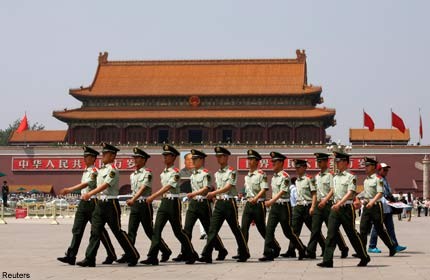 CHINA - China's leaders tend to retire into obscurity, but not so its retired senior officials, many of whom are getting a second wind in the corporate world.

More than 20 former officials of at least vice-ministerial grade are now sitting on the boards of listed corporate enterprises as independent directors. This is up from 11 at the end of 2009, according to local Chinese reports.

Independent directors do not hold shares in the firm, are not related to management or shareholders, and are supposed to help improve corporate governance.

The practice, which is common in other countries including Singapore, has been making headlines here in recent weeks.

Retired officials' connections and status are cited as key reasons why companies are willing to pay up to 260,000 yuan (S$53,400) annually for their services. The Sinotruk trio reportedly get 180,000 yuan in directorship fees.

Financial columnist Cao Zhongming wrote in his blog on Monday: "Companies believe they have nothing to fear if they run into problems, because they have former officials who have good political connections... Also, companies believe these officials could influence government policy formulation that could benefit the enterprises."

A 2009 survey of 768 listed firms found that they employed 1,599 former government officials. About 500 were independent directors, of whom 11 held posts of at least vice-ministerial level. Reports show that former Cabinet ministers are the highest-ranked officials to take up such directorships.

The spotlight on the practice has thrown up some controversy.

Given the Communist Party's ongoing drive against extravagance and corruption, some people are questioning if these retired officials are overpaid for doing nothing much or are culpable of abuse of power by helping to "pull strings" via their contacts.

Others say some retired officials could be flouting civil service rules by accepting directorships too soon after retirement.

Under China's Civil Servant Law, government officials are forbidden from joining firms in areas directly related to their work within two years after they resign or retire. Senior officials have to observe a three-year break.

Those caught breaking the rule could be fined by the agency they last worked at, with the amount going up to five times their earnings during the offending period.

So Mr Cui is deemed to have broken this rule since he joined PetroChina in May 2008, less than three years after he quit the tax agency in December 2006, according to the China Youth Daily.

Professor Wang Yukai of the Chinese Academy of Governance told The Straits Times that the public outcry is partly due to the fact that China's retired senior officials already enjoy benefits such as a pension and state-paid car.

"If they are paid big sums and are found to contribute to abuse of power or graft, it could widen the social inequality and increase public discontent," he said.

But there is value in making use of the officials' experience and expertise if it is done legally, Prof Wang said.

"It is a delicate balance."