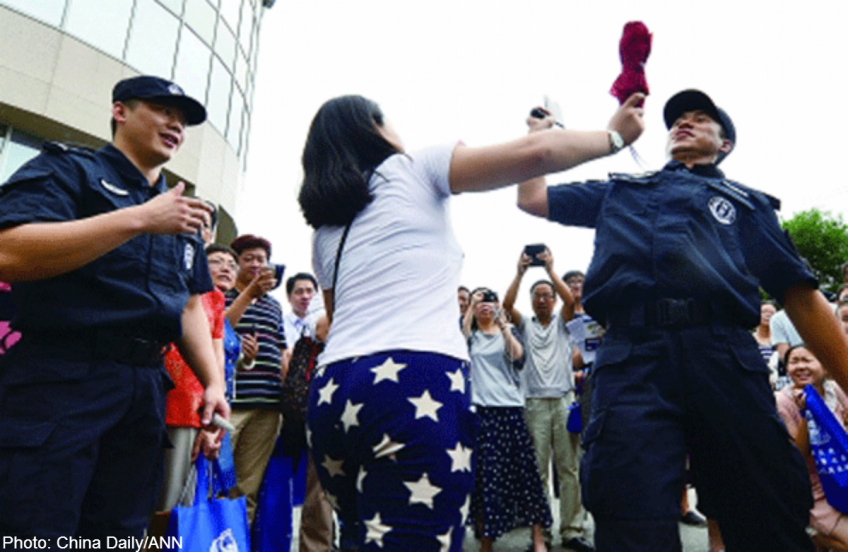 SWAT agents instruct a woman how to react to an attack during an event in Beijing on Tuesday at which anti-terrorism manuals were distributed.

China's national counter-terrorism office issued a citizens' anti-terrorism manual on Tuesday - the first of this kind - in Beijing, Shanghai, Henan and Guangdong provinces and the Xinjiang Uygur autonomous region, launching a "people's war against terrorism" as proposed by Guo Shengkun, minister of public security.

Using text and cartoons, the manual offers instructions on 42 topics such as "What to do after being abducted by terrorists" and "What to do if a gunfight breaks out in the subway". It tells ordinary people how to protect themselves from terrorists.

At a ceremony during which the manual was distributed in front of the Sogo mall in Beijing, a demonstration was held to show how to deal with a terrorist. A Special Weapons and Tactics agent waved a kitchen knife at another agent in a mock attack.

Before the "attacker" could slash him, his partner swiftly used two hands in an upward block to the attacker's wrist.

The audience was impressed.

"Give me your umbrella," said the agent teaching the defence skills. He then threw the umbrella into his partner's face before anyone realised what was happening.

"Always remember, ladies and children, your first principle is to save your life," the agent explained. "Don't engage in combat. Just throw anything you have into their face, as hard as you can. Then run!"

"I'll definitely teach the lessons to my parents and my best friends," Hao said after the demonstration. "Just being able to calm down when facing bad people might save our lives."

An Weixing, head of the Counterterrorism Bureau of the Ministry of Public Security, said: "Distributing the manual for free is just a start. We will increase counterterrorism education and training programs throughout the country, so that we can build an anti-terrorism system that involves not only the experts, but the whole society."

Extra efforts are also being made in some cities as citizens who provide anti-terrorism information to public security officials stand to collect substantial rewards.

Informants can be rewarded up to half a million yuan ($80,000) in Jiangsu and Liaoning provinces, the Inner Mongolia autonomous region and major cities such as Chengdu, Sichuan province, and Wuhan, Hubei province, according to government websites.

Authorities in cities like Shenzhen and Zhongshan, Guangdong province, set no limit for rewards, in a bid to gain valuable intelligence from members of the public, according to Guangdong's public security officials.

Guo, the public security minister, reiterated the determination to fight a "people's war against terrorism" during a visit on July 8 to officials working on a special operation targeting violent and terrorist activities, part of a yearlong national anti-terrorism campaign that began in April.