Chinese railway police detained a passenger after he tried to smash the door window of a high-speed train to "get some fresh air" according to mainland media reports.

The 30-year-old man, identified only by his surname Xu, said he tried and failed to unlock the door and then decided to break the glass with an emergency hammer because he had been drinking and felt sick, China National Radio reported on Saturday (May 18).

Xu tried to smash the door after mechanical failure had forced the Beijing-bound train from Shanghai to stop at the main railway station in Jinan in Shandong province on Tuesday.

He said the train had been stranded for half an hour when he became impatient and wanted to have some fresh air, according to the report. 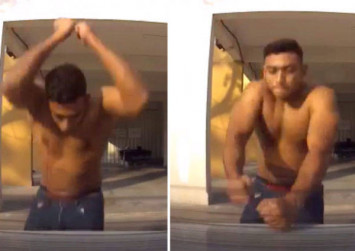 Surveillance footage showed the man pulling on the door handle before hitting the glass with an emergency hammer mounted on the wall.

Staff quickly intervened and stopped Xu, who was taken into police custody after the train arrived in Beijing.

"I just smashed it once. I assumed this would allow air to come in, so I stopped," Xu was quoted as saying.

"I felt unwell at that moment because I had been drinking at lunchtime. I did it on impulse."

He was detained for allegedly intentionally damaging property, an offence that could lead to up to three years in jail.

The incident comes just a few months after a woman tried to use an emergency hammer to smash the window of a moving train on the way from Beijing to Qingdao.

The woman had been arguing with her boyfriend and hit the window in a fit of pique, according to media reports.

She was charged with criminal damage and sentenced to five days in detention.