The robot rat can climb over obstacles.

Chinese scientists said they have developed a robot rat that they hope can be used in post-disaster rescue missions.

They said the rat can squeeze through narrow spaces, climb slopes, get over obstacles and walk on snow, adding that it could be used to carry medical supplies or emergency rations to places rescuers cannot reach, for example to people trapped under rubble after an earthquake.

The team of researchers from the Beijing Institute of Technology and Tsinghua University published their findings in the peer-reviewed journal IEEE Transactions on Robotics this month.

Lead author Shi Qing, a professor and the vice-director of the intelligent robotics institute at the Beijing Institute of Technology, said the team has been upgrading the prototype since 2019 and hopes to get the robot ready for market launch in 2025.

“The robotic rat can be sent to earthquake ruins or building collapse scenes where debris forms spaces that are too narrow for rescuers to enter. It can deliver emergency rations to people trapped under rubble,” he said.

“It can also navigate complex underground pipeline networks, a key part of smart city development. A larger inspection robot can carry the robotic rat into the network, where it can be deployed to go into smaller pipes for detection tasks.”

The robot is designed to mimic the motion of actual rats – it can stand from a crouching position or stay low to the ground and crawl in a space with a low ceiling height, according to the study.

It could also turn with a small radius in curved narrow passages and recover from falls by controlling its limbs and cervical spine to adjust its centre of mass, allowing it to work on rugged terrains, the paper said.

Read Also
Japanese robot can peel bananas cleanly, most of the time 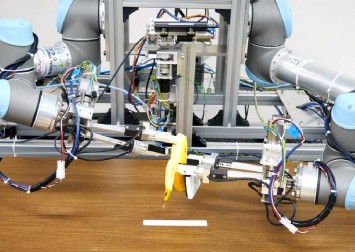 The team used X-ray recordings to observe the skeletal structure of rats and build the robot, which can be assembled with 3D-printed parts in about one week, Shi said.

The head and body are made of photosensitive resin, while high-strength nylon forms the four limbs to ensure strength and rigidity. It also has a tail made of soft rubber that can move up and down to maintain balance when it moves, according to the study.

The robot, measuring 19cm in length and weighing 220g, is powered by solar rechargeable batteries that can last 30 minutes and be controlled remotely via wifi using a computer or phone, Shi said.

It walks at an average speed of 15cm per second and has a 200g payload for sensor installation or transporting light goods.

The team said they will continue to upgrade the robot, including improving its agility, installing more sensors for field tests in narrow unstructured pipelines and waterproofing the machine.