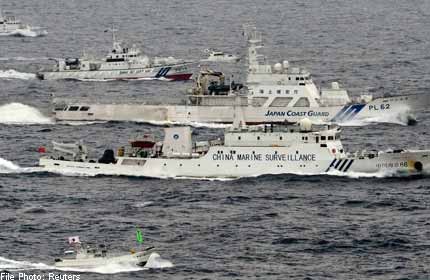 TOKYO - Three Chinese government ships sailed into waters around islands at the centre of a dispute on Thursday, the day after Japan's premier visited coastguards who patrol the area.

The maritime surveillance vessels entered the 12-nautical-mile zone regarded as the territorial waters of the Senkaku islands in the East China Sea, at around 9:30 am (0030 GMT), the Japanese coastguard said.

China calls the islands the Diaoyus and claims them as its own.

Abe was in the remote Okinawan island of Ishigaki in the East China Sea, 2,000 kilometres (1,240 miles) southwest of Tokyo, where he told crews his resolve to stand up for Japan was undimmed.

The visit came just a few days ahead of elections for half of the seats in the upper house of parliament, which observers expect to be a shoo-in for Abe's ruling boc.

Tensions have steadily risen between the two Asian giants, with China frequently sending official ships into waters around the Tokyo-administered islands.

The long-standing dispute reignited last September when Tokyo nationalised three islands in the chain in what it said was a mere administrative change of ownership from a private landowner.

China insists the islands were part of its territory until Japan annexed them in 1895 at the start of a half-century of acquisitive invasions that culminated in World War II.