"Five Chinese students have been booked but they are not under arrest," a detective at Seoul Metropolitan Police said.

South Korean students from five universities in Seoul filed complaints against the five foreign students and accused them of destroying displays, known as Lennon Walls, supporting Hong Kong's protests, which have been running for six months.

Police have not decided whether to hand the case to state prosecutors - a prerequisite for charges to be laid - or give the five students a verbal warning against further offences and drop the case, the detective said.

South Korea hosts more than 71,000 students from mainland China, accounting for 44.4 per cent of the country's total international student population.

Campus activism in support of Hong Kong's protesters has created tensions between South Korean and Chinese students. Oh Je-ha, a student activist and fourth-year sociology student at Yonsei University, said nearly every pro-Hong Kong poster he and his group posted had been damaged.

Sujin Han - in her early 20s and studying public administration at Korea University - last week told the South China Morning Post her personal details had been shared on a WeChat group used by almost 500 mainland Chinese students in South Korea.

"They sent me messages with swear words," said Han, who hosted a public forum at Korea University calling for solidarity between Hong Kong and mainland Chinese students in "uniting against dictatorship".

She also described the abuse suffered by a female acquaintance at Hankuk University of Foreign Studies, where posters of her face were posted around campus, captioned with "I'm a parasitic slut" and "I am a mentally ill person".

Han said Korea University had "done nothing at all" to counter the abuse. 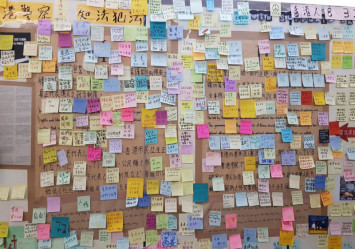 "I've heard some staff support Hong Kong's protest movement but they are not officially stating this… Chinese students represent money for the school," she said.

Last week, Kim In-cheol, a spokesperson for the Korean Ministry of Foreign Affairs, said officials were "closely monitoring the situation as it happens".

"We expect everyone to express their opinion in accordance with South Korean laws and regulations [in] relation with the situation in Hong Kong," Kim said.