China should think twice before unleashing more economic weapons on Taiwan to avoid blowback that could leave it in a "deeper predicament", experts and foreign business leaders say.

Beijing launched a barrage of trade suspensions on Taipei on Wednesday (Aug 3) following the controversial visit of US House Speaker Nancy Pelosi, including export and import bans and sanctions on multiple organisations and companies for supporting "Taiwan independence".

On Thursday, the PLA kicked off large-scale air and naval joint drills encircling Taiwan that will run until noon on Sunday, in an unprecedented war game by the mainland against the self-governed island.

Beijing regards Taiwan as a breakaway province that must be reunified with the mainland, by force if necessary.

But applying more aggressive economic action could compromise China's political influence, which is derived from its reputation as a stable international trading partner, said Guo Hai, a researcher at the Institute of Public Policy at the South China University of Technology.

"If China really wants to change the current passive situation, the country can either hold its strategic ground or adopt an approach other than economic sanctions," he said.

"Economic sanctions are likely to only put China in a deeper predicament."

The European Union Chamber of Commerce in China said it was not in Beijing's interest to alienate Taiwanese or American investors.

"The visit will unfortunately ensure that geopolitics remains very much on the mind of company executives, a factor which is already pushing businesses to re-evaluate how they structure their supply chains and business operations, and consider creating divergent systems for China and the rest of the world," it said in a statement.

But the business lobby said it was not wise to provoke China on the issue of Taiwanese independence, either, particularly with the 20th party congress not far away. 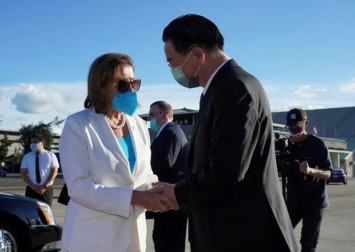 "The visit was not beneficial for the business environment in Northeast Asia, which is already highly politicised," the chamber said.

Completely cutting trade ties between the island and the mainland would not only lead to a trade deficit and outflow of resources from Taiwan, but disturb the regional economy, said the Ningbo China Institute for Supply Chain Innovation.

The Group of Seven (G7) on Wednesday expressed concerns about Beijing's response to the visit, particularly its live-fire exercises and "economic coercion", which they argued would risk "unnecessary escalation".

China's Taiwan Affairs Office of the State Council said on Thursday it was taking "necessary" countermeasures to safeguard its sovereignty and territorial integrity, which is "righteous" and "legitimate".

Beijing's trade action against Taiwan has begged the question of whether it will target the US over Pelosi's visit.

Hong Hao, an independent economist, warned that extending sanctions to the US was likely to hurt China's exports and inbound foreign investment, both of which are now the driving force for the country's growth.

"Instead, [China] should take the chance to negotiate with the US to cut Trump-era tariffs," he said. 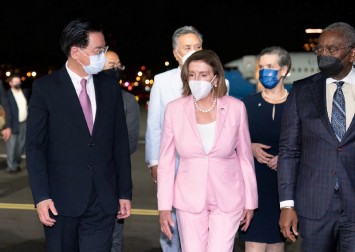 US President Joe Biden is considering whether to roll back existing tariffs on Chinese goods, most of which have been in place for four years, although opinions are divided about this step within the administration and among American businesses.

During her trip to Taiwan, Pelosi met with the chairman of Taiwan Semiconductor Manufacturing Co (TSMC), the world's leading contract chip maker.

The discussions between Pelosi and Mark Liu put the spotlight on US efforts to build a strategic alliance with three other global chip powerhouses, namely South Korea, Japan and Taiwan.

The US-led Chip 4 alliance is viewed as an initiative to exclude China from semiconductor value chains.

Still, a Chinese embargo on Taiwanese chips following Pelosi's visit is "relatively unlikely", according to Nick Marro, lead for global trade at The Economist Intelligence Unit.

"A ban on Taiwanese semiconductor imports would thus be eyebrow-raising, but it could end up being a pyrrhic victory," he said, citing the mainland's dependence on Taiwanese chips and other electronics parts.