Chinese University plans to fork out HK$70 million (S$12 million) to fix campus facilities and repair its buses that were severely damaged during vandalism by radical anti-government protesters in November.

The university in Sha Tin was one of the campuses that suffered the most damage when radicals entered at least six publicly-funded universities - including Polytechnic University (PolyU) and City University (CityU) - during protests that month.

The PolyU campus in Hung Hom, the scene of a 13-day siege and fierce clashes between protesters and police, also suffered massive damage. But its restoration costs are yet to be announced.

Protesters entered the Chinese University on November 11 and threw objects from its No 2 bridge onto the Tolo Highway and railway tracks beneath to block traffic, marking the beginning of a five-day occupation of the campus.

Students and staff had to vacate the campus during the occupation by radicals as several buildings were vandalised and hazardous materials were stolen from laboratories.

Nearly 4,000 petrol bombs were found on the campus after the protesters fled on November 15.

The university said in a statement on Thursday it would spend about HK$70 million for repairs, of which HK$30 million will be used to fix or replace 75 buses that were used to transport its students and employees.

The university will cover the costs for now.

The campus of CityU in Kowloon Tong, including the offices of its president, was also vandalised. The university announced earlier that its repair costs would reach a nine-digit figure.

Hong Kong's top officials earlier said universities could seek financial help from the government or apply for funding in the Legislative Council if they found it difficult to bear the expenses.

According to Chinese University's latest financial report, it earned HK$9.5 billion from various sources in 2017-18, of which HK$4.9 billion came from government subventions. It also saw a HK$1.6 billion surplus in the year.

Jacky So Tsun-fung, student union president of the Chinese University, said that the government should shoulder part of the responsibility for restoration costs but that it was up to the university to make a final decision.

"The university has its own administrative regulations and considerations. It's best to leave the matter to the professionals," he said. 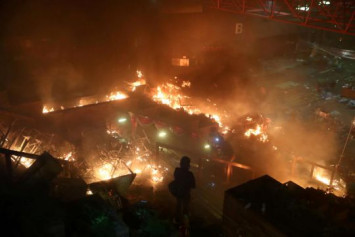 Chinese University reopened its campus on November 25 with a strengthened access control system in place. The university's second term will start next Monday.

The university has made temporary arrangements for on-campus shuttle bus service as its own buses lay severely damaged.

PolyU started to install turnstiles at its entrances on Thursday to step up security measures.

Students and staff would have to tap their cards to enter the campus from now on, Owan Li, a student representative on the university's governing council, said.

The university has already installed an access control system with guards standing by at its entrances for security checks. It will begin its second term on January 13.