Five Chinese workers at a nickel smelter on Indonesia’s Sulawesi island are facing up to five years in prison after they killed a crocodile and prepared it as soup, according to a local conservation authority.

Their acts were captured in photographs and a video that later went viral, prompting the Southeast Sulawesi Natural Resources Conservation Center (BKSDA) to take legal action against the miners, who were deemed to have violated Indonesian law as crocodiles are a protected animal.

The crocodile was caught by locals on Wednesday after it was found in a weak condition in a drain near the nickel smelter, which is run by Obsidian Stainless Steel (OSS).

The Chinese workers reportedly asked the locals for the crocodile, which they planned to eat. Before it was killed and eaten, the animal was tied up and pictures were taken of it wearing sunglasses and an OSS-branded safety helmet.

The locals notified the natural resources agency, who then deployed a team to the smelter on Wednesday, but they were too late and could only find traces of the crocodile’s blood as well as leftover meat in the soup, according to BKSDA local branch head Laode Kaida, as quoted by news portal Detik.

The government agency has summoned the Chinese workers for questioning.

“The foreign workers did not know that crocodiles are protected animals [in Indonesia],” Sakrianto Djawie, head of the provincial BKSDA, told Kompas.com.

According to Sakrianto, many crocodiles live in the swamp and rivers in Morosi, one of the nickel hubs in Southeast Sulawesi. “Those are their habitats, but they have been damaged due to mining activity in the area, so crocodiles are pushed on to land,” he said. 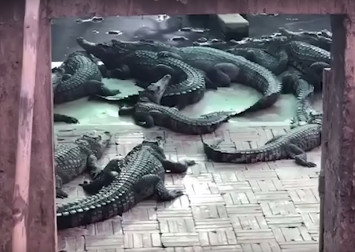 If the workers were found guilty, they could be sentenced to five years in jail, according to a 1990 law on natural resources and ecosystem conservation, Sakrianto said.

Former youth and sports minister Roy Suryo said the workers should be deported from Indonesia following the incident.

“We need to kick them out, they can’t be hiding under the guise of not knowing the rules. They can read the law and regulations,” he told the Tribunnews website. “This is truly inhumane.”

The employment of Chinese workers is a controversial issue in Indonesia. Jakarta has been heavily criticised for letting around 200 Chinese workers enter the country between January and August, encompassing the period while borders were closed during the peak of the second wave last month.

Most of these workers are employed by Chinese-run smelters and mining companies, as well as stainless steel producers, in nickel mining hubs on the islands of Sulawesi and Halmahera.

The Indonesian government classifies these mining activities as national strategic projects, making the Chinese workers eligible for entry into the country.

In response to the flak, the Ministry of Law and Human Rights last month barred the entry of Chinese workers until borders are reopened.

The incident also highlights challenges faced by Indonesia in protecting its endangered species, as humans are increasingly encroaching on their natural habitats.

A Sumatran tiger and her two cubs were found dead this week in Aceh province in a snare trap; only a few hundred of the tigers are thought to remain in the wild.

Last month, a Sumatran elephant was found decapitated at a palm oil plantation in Aceh, with its tusks missing. The species is critically endangered, with just an estimated 500 elephants remaining in Indonesia.