People watch as Tjia Nyuk Hwa, 45, an Indonesian Christian, is publicly flogged outside a mosque in Banda Aceh on February 27, 2018.

Authorities in Banda Aceh have caned a non-Muslim married couple on Tuesday after the two were arrested for gambling at an entertainment center in the capital of Aceh.

Aceh is the only province that upholds sharia, although non-Muslims found guilty of committing crimes that are regulated under the Criminal Code (KUHP) such as gambling can choose to either be punished by incarceration as stipulated under the KUHP or under provincial sharia. 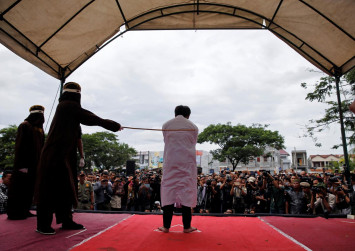 The couple were found guilty of violating a jinayat (Islamic bylaw) on gambling. The caning took place outside the Babussalam Mosque in Lampaseh Aceh, Meuraxa, Banda Aceh.

Each lash is the equivalent of one month's incarceration, thus the Christian couple were said to have preferred to receive corporal punishment.

The court also sentenced Ridwan, 67, to 22 lashes for allowing gambling to take place on his premises. The authorities confiscated coins, vouchers and cash from Ridwan. The court also convicted unmarried couple Muzakkir and Cut Hamidar for khalwat (affectionate contact between an unmarried couple). The couple received 25 lashes each. 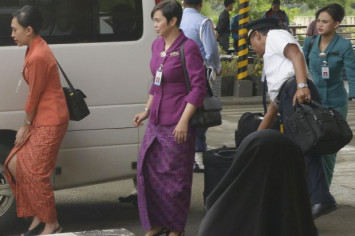 “This punishment shows our commitment [to implementing sharia]. We want to create a deterrent so that other people do not violate sharia,” Banda Aceh Mayor Aminullah Usman said, adding that the caning was deliberately carried out in an open space so that the public could see it.

“This is different to imprisonment, in which the public can’t see [the convicts being punished],” he said, adding that he called on people to report any violations of sharia to local authorities.