The Pollution Control Department (PCD) and Greenpeace yesterday warned people in Bangkok and other major cities about the surge in particulate matter with a diameter of 2.5 microns or smaller (PM2.5) to dangerous levels.

Greenpeace Southeast Asia director Tara Buakamsri said city traffic and drifting air pollution from the industrial zone in the East were responsible for the harmful PM2.5 levels in the capital. The impacts had also reached as far as Bangkok.

"If we consider the wind direction, we can see that from February to September, the wind blows towards the Southwest, carrying air pollution from the Eastern Seaboard Industrial Zone to Bangkok," he said.

"Therefore, air pollution in the capital is not solely generated by traffic within the city, but also from the coal-fired power plants far away."

The BLCP and GHECO-One coal-fired power plants both use imported high-quality bituminous coal as fuel for electricity generation. They have the capacity to generate 1,434 megawatts and 660MW respectively. The air pollution in Bangkok and many provinces in the upper part of the country has jumped to critical levels since Wednesday, as the PM2.5 level has risen beyond safe limits.

The PCD revealed that all air-quality monitoring stations in Bangkok had measured the PM2.5 as rising beyond Thailand's safe level of 50 micrograms per cubic metre of air. It advised those at high risk, such as patients with heart disease and respiratory disease, to wear a facemask or avoid outdoor activities.

According to the air quality data of the PCD, the highest PM2.5 in Bangkok was recorded in Wang Thonglang district - an unhealthy 148.86 milligrams - while many provinces such as Samut Prakan (129 milligrams), Prachinburi (126.58 milligrams), and Saraburi (125.62 milligrams) were also suffering from very high levels of PM2.5.

The Meteorological Department predicted that the cold and misty weather in Bangkok would continue until Sunday. Due to this weather pattern, officials predicted that air pollution would remain a serious problem in Bangkok until at least this coming weekend. Disease Control Department director-general Dr Suwannachai Wattanayingcharoenchai said that despite the situation there were no reports of increased sickness due to air pollution.

He advised people to protect themselves by breathing through a wet handkerchief and to avoid working and exercising outdoors. 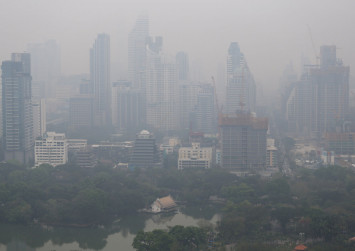 Suwannachai also urged people to regularly check updates from the authorities about the pollution situation and how to keep themselves healthy.

Chariya Senpong, Greenpeace coordinator on energy and climate change, cautioned that ordinary face masks could not filter PM2.5 and suggested that people use face masks that meet the KN95 standard or above to protect themselves from the very fine particulate matter prevalent in the air.

Chariya also emphasised that air pollution contributed to more than 50,000 premature deaths every year and that authorities should take more action to protect people from deadly air pollution.