Commander apologises over death of corporal 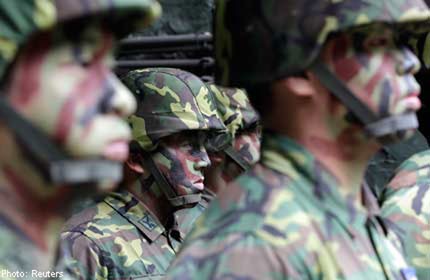 TAIPEI - Republic of China Army Commander Lee Shying-jow (???) yesterday apologised to the nation over the death of Corporal Hung Chung-chiu (???), saying that he assumes full responsibility and that the military will get to the bottom of the case.

The commander made the comments at a press conference held last night.

Earlier yesterday military prosecutors summoned a number of active and former military personnel over the disciplinary confinement and resulting death of Hung.

All of them are currently serving or have served in the 542nd Armored Brigade, which is located in Hsinchu County, where Hung served before his death earlier this month.

Chen, Fan and Hsu are reportedly facing charges for abusing their power by sending Hung into disciplinary confinement, which led to Hung's death. Lu could face charges for failing to give appropriate medical treatment to Hung, who died of heatstroke on July 4.

Military prosecutors also summoned Liu Hsuan-yang (???), a former fellow Army conscript who served with Hung in the 542nd Armored Brigade, as a witness to clear up the allegations centering on Hung's death.

Hung a Victim of a Personal Vendetta: Witness

Liu told prosecutors that Hung was the victim of a personal vendetta.

According to Liu, Hung was sent to confinement at a Taoyuan base on June 28 because during a forum on June 26 he expressed views different to those of his superiors, Chen and Fan, and had on several occasions voiced opposition to their treatment of Hung's fellow soldiers.

Chen and Fan had wanted to "teach Hung a lesson," Liu said, and Hung being found in possession of a prohibited item - a cellphone capable of taking photographs - gave them the opportunity to settle their grudge.

Liu claimed the two persuaded the brigade's deputy commander, Ho Chiang-chun (???), to have Hung thrown into the brig in less than half a day.

Under normal circumstances it takes several days to complete the disciplinary action procedure, which involves a physical and psychological evaluation of the offender by medical personnel.

During last night's press conference, however, an Army officer said that Hung's punishment was meted out on June 25, a day before he took part in the forum, suggesting that in terms of timing, Hung's confinement couldn't have been a result of a vendetta.

The 24-year-old Hung, who was originally scheduled to be discharged from the Army on July 6, died of heat exhaustion on July 4 after performing a series of exercises in extremely hot weather conditions.

Ho is currently in detention after the Military High Court approved a request from military prosecutors on Tuesday.

The prosecutors said that Ho abused his position by asking his subordinates to speed up the process to send Hung into confinement.

Ho is now facing charges of abuse of power and handing punishments to Hung that were harsher than stipulated in the Criminal Code of the Armed Forces.

Of the 37 military personnel who have been punished for Hung's death, Ho is the only one who has been detained.