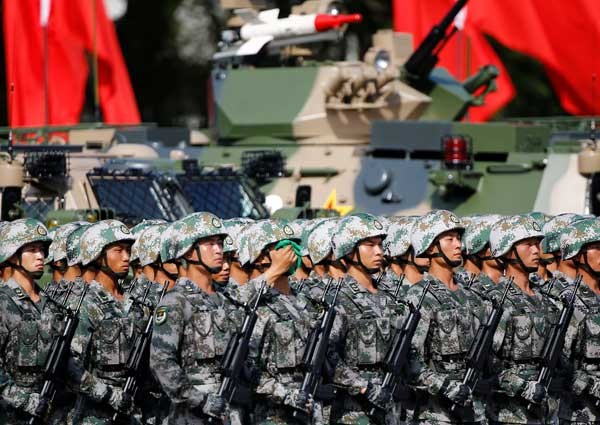 Soldiers stand in formation at a People's Liberation Army (PLA) base in Hong Kong as part of events marking the 20th anniversary of the city's handover from British to Chinese rule, June 30, 2017.
Reuters

HONG KONG - For the thousands of Chinese soldiers stationed in Hong Kong, the pen, it appears, is mightier than the sword.

Pens, contraceptives, lipstick, eye drops and opium are among an unlikely list of items guests were banned from taking on a trip to a People's Liberation Army (PLA) base on Friday as part of activities to mark the 20th anniversary of Hong Kong's handover from British to Chinese rule.

Security officers were taking no chances as they offered invitation-only guests a rare glimpse of barracks life at the Shek Kong base in a lush corner of the New Territories that sits in the shadow of Tai Mo Shan, Hong Kong's highest mountain.

Umbrellas, a symbol of pro-democracy protests in 2014, were also banned but purple alternatives were provided.

A list of prohibited items provided to reporters ahead of the visit also included heroin, marijuana, sunscreen, cosmetics and microwave transmission equipment.

Guests, gathered in sweltering temperatures of more than 30 degrees Celsius (86 degrees Fahrenheit), were treated to a military display that included Z8 helicopters, mobile air defence missile trucks and armoured cars as martial music drowned out the high-pitched song of cicadas.

Chinese President Xi Jinping, who oversees the PLA in his role as head of the powerful Central Military Commission, arrived in a motorcade and inspected 20 squadrons of troops and more then 100 pieces of military equipment, as music blasted from loud speakers.

While its precise numbers are unknown, foreign envoys and diplomats believe the PLA garrison in Hong Kong is made up of between 8,000-10,000 personnel, including infantry and special forces troops.

The force is split between a network of barracks and facilities inherited from the British military in Hong Kong, as well as bases across the border in Guangdong, where its jet fighter planes are kept.

The troops spend their time isolated on barracks strictly separated from the public.