Coordinating Political, Legal and Security Affairs Minister Mahfud MD talks to reporters on the sidelines of an event held by law firm Dentons HPRP in Jakarta on Jan 22, 2020.

Coordinating Legal, Political and Security Affairs Minister Mahfud MD has caught flak for his recent statement that likens the country’s efforts to curb the spread of Covid-19 to a husband’s control over his wife.

“[His] statement not only reflects the government’s shallow thought process in resolving issues related to the Covid-19 pandemic, but it also exposes public officials’ sexist and misogynistic mindset,” she said in a statement on Wednesday.

Dinda went on to say that Mahfud’s remarks had explicitly conveyed an intention to subjugate women as a mere object by rendering them analogous to coronavirus.

“A joke that casually objectifies women will only normalise violence against women,” she said, adding that Mahfud’s outlook had also demeaned women as inferior to men.

“When a public official says something condescending to women, it becomes a challenge for us as we continue to push the government to fulfil and protect women’s rights.” 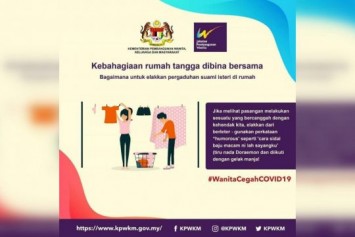 It was previously reported that Mahfud compared the country’s efforts to adjust to the post-coronavirus reality to being married to a woman.

“I got a meme from [Coordinating Maritime Affairs and Investment Minister] Pak Luhut yesterday that goes, 'Corona is like your wife. You try to control it then you realise that you can’t. Then you learn to live with it',” he said in jest during an online event on Tuesday as quoted by tempo.co.

His statement has also been met with a less-than-enthusiastic response from the public, with many social media users expressing their disappointment in Mahfud’s blatant display of sexism.

“Disgusting. I’ll wait for a clarification!” @ariel_heryanto tweeted on Tuesday.

“If they don’t like their [wives], why don’t they marry each other?”