A customer soaks himself in a bath at public bathhouse "Daikoku-yu", amid the coronavirus disease pandemic in Tokyo, Japan, on July 1, 2020.

TOKYO - Craft beer, live music and lodging featured in renovation plans that Takuya Shimbo had for an aging Tokyo bathhouse, hoping to rescue a fading industry from extinction by reinventing the concept of communal bathing.

Then the novel coronavirus struck.

The government deemed Japan’s few remaining bathhouses as critical for public hygiene so it requested they stay open, while at the same time encouraging people to stay at home during a state of emergency to prevent the spread of Covid-19 which has killed around 1,000 Japanese.

“The costs, like staff and heating, don’t change, but we had far fewer customers,” said Shimbo, the 41-year-old third-generation owner of Daikoku-yu in northeastern Tokyo.

The 60 per cent plunge in customers, along with expenses for gutting and renovating another decrepit bathhouse in the neighbourhood, put him in precarious shape.

“We were operating in the red,” he added.

Bathing in naturally heated hot springs is a popular leisure activity in Japan. Public baths - or sento - on the other hand traditionally served people who did not have a bath at home.

Divided into separate men’s and women’s sections, bathers scrub down before soaking together in hot tubs.

They have also been places to socialise and promote community ties - and still are, though bathers are currently discouraged from talking to prevent the spread of the coronavirus. 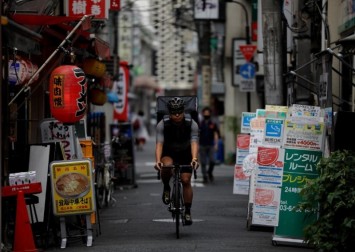 “The best part of bathhouse culture is that status doesn’t matter; whether you’re a child or an adult doesn’t matter. Everybody goes in naked,” Shimbo said. “But we have to change to survive.”

The number of baths throughout Japan peaked at 18,000 in 1968 but now stands at 2,000, hit by social changes including more baths at home.

Even the addition of saunas, jacuzzis and outdoor baths with landscaping has not been enough to compete with places like health spas.

“Baths are good for communication, you can become friendly with anyone,” said Kiyoshi Hiraoka, 83, who bicycles 15 minutes to patronise Shimbo’s Daikoku-yu and kept coming faithfully even during the state of emergency.

Shimbo is among a new generation of owners trying to keep the tradition alive with modern attractions such as in-bath film screenings and lobbies equipped with co-working spaces and beer taps.

His efforts include comedy shows, live music, yoga classes, and - for one day - converting the bathhouse into a haunted house with roaming ghosts and corpses in the baths. 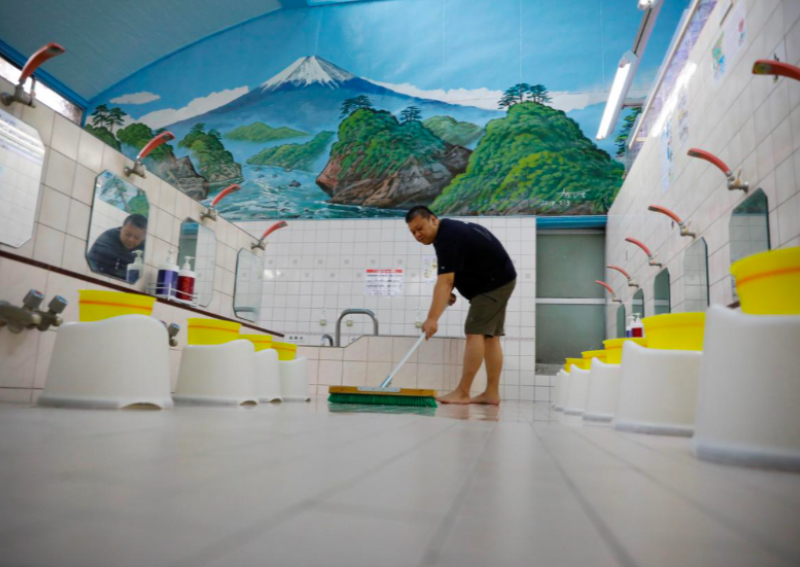 Takuya Shimbo, the third-generation owner of public bathhouse "Daikoku-yu", cleans the floor before its daily opening amid the coronavirus disease pandemic in Tokyo, Japan, on July 1, 2020. PHOTO: Reuters

Elsewhere in Tokyo, second-generation owner Hisao Iwasaki attributes the longevity of his bathhouse partly to a lobby featuring a model railway and a dozen cats.

“If you don’t have something special, customers won’t come,” he said. Even so, his wife Eiko said customers fell by half during the state of emergency. 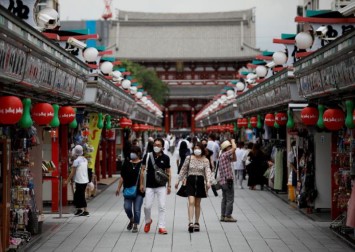 Shimbo fears fewer than half of his area’s 18 bathhouses will still be open in five years’ time and hopes that by renovating a different bathhouse in his neighbourhood he can help point bathhouse owners in a new direction for survival.

“A bathhouse that also has a place to stay, a place to eat, a beer tap - if we make this a successful business model, others may do it, keeping bathhouses going,” he said.

With building plans postponed by the coronavirus, and customers down yet costs unchanged, Shimbo took to crowdfunding to keep his plans afloat and raised 7 million yen (S$92,000) - more than twice his goal.

“I’m not sure we’ll be able to make up everything through this,” Shimbo said.

But he said many contributors told him to keep on fighting.

“The support really gave me courage... It showed me people want this sento culture to go on.